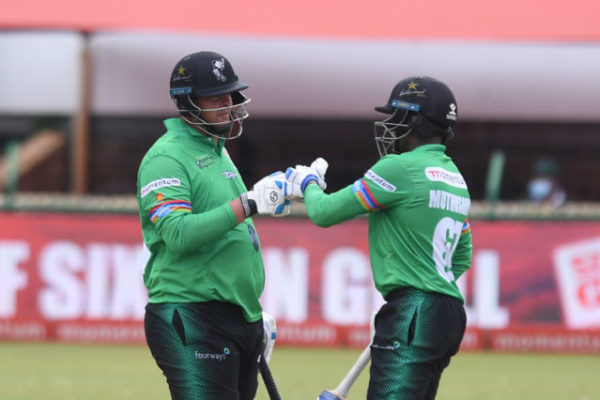 Posted at 08:43h in Domestic by admin@csa

POTCHEFSTROOM: Fabulous all-round performances by Robbie Frylinck and Senuran Muthusamy ensured the Hollywoodbets Dolphins remained on track to defend their Momentum One-Day Cup title after they booked their ticket to Thursday’s final with a narrow three-wicket win over the Six Gun Grill Cape Cobras in Potchefstroom on Monday.

In a low-scoring affair at JB Marks Oval, both men took two wickets apiece to help the defending champions bowl out their opponents for just 196.

They were then even better with the bat, sharing in a fixture record sixth-wicket partnership of 112 with half-centuries to rescue their side from 58 for five, before ensuring they chased down the target with 7.3 overs to spare.

The Dolphins, who won their only two matches that were completed in a rain-ravaged group stage, now await the winner of the Imperial Lions and VKB Knights last-four showdown on Tuesday ahead of the deciding game later in the week. All the matches are being hosted in a bio-secure environment (BSE) hosted by the North West town.

Imraan Khan’s side will feel fully justified by their progress against an improved Cobras, especially after their display with the ball.

They were superb from the time they won the toss and opted to bowl first, allowing only Tony de Zorzi to make a significant impact with this 61 off 71 balls (5 fours).

The opener shared in a strong 81-run second-wicket stand with Jason Smith (37) and had taken Ashwell Prince’s charges to an encouraging 123 for three before he departed in the 30th over.

That threw the Cobras into a bit of a panic as the middle and lower-order failed to make any significant impact. Only Onke Nyaku (25) managed to cross 20, with Ottniel Baartman (3/15) proving a real dangerman for the KwaZulu-Natal side alongside the likes of Frylinck, Muthusamy and captain Prenelan Subrayen (2/45).

That left the Dolphins with a modest target, but they made a real hash of the chase by slipping into big trouble early on.

Corbin Bosch (2/52) and Imran Manack (2/36) were made the early inroads for the Cobras to leave their opponents on the ropes by the 18th over. At that stage, only Grant Roelofsen (34) had managed to trouble the bowlers.

However, the lower order delivered as it has done so on many occasions previously for the Dolphins. While Muthusamy dropped anchor, Frylinck waited for the bad deliveries to capitalise – the pair rebuilding and then taking their side to the brink with a record fixture stand, which broke the previous mark of 110 set by Cody Chetty and Khaya Zondo set at Durban in 2013/14.

By the time they were dismissed, the finish line was in sight and Subrayen (7*) and Eathan Bosch (9*) completed the job for their side.