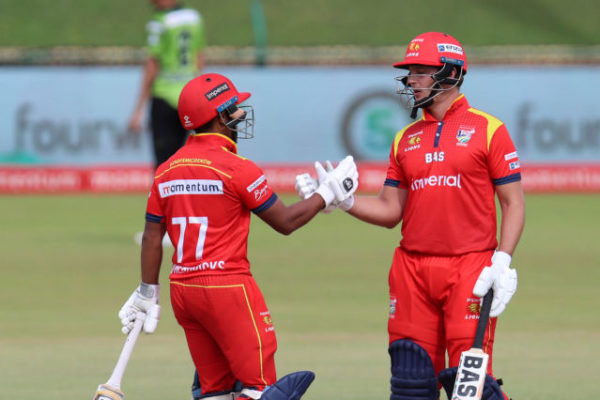 Posted at 08:54h in Domestic, Warriors by admin@csa

POTCHEFSTROOM: Unbeaten 90s from Dominic Hendricks and Delano Potgieter upstaged a century from Jon-Jon Smuts as the Imperial Lions booked their ticket to the Momentum One-Day Cup semi-finals with a six-wicket win over the Warriors in Potchefstroom on Wednesday.

The two men shared in a 156-run fifth-wicket partnership – a franchise record – helping their side comfortably chase down a 248 target with 3.2 overs to spare at JB Marks Oval, where the tournament is being hosted in a bio-secure environment (BSE).

The versatile Hendricks struck 91 off 109 balls (8 fours) and all-rounder Potgieter recorded a slightly more attacking career-best 96 off 105 balls (5 fours, 4 sixes), their performances helping compose Wandile Gwavu’s side following a rocky period prior to them reaching 100.

Earlier on, Smuts was the star with 102 off 119 balls (10 fours, 2 sixes), his seventh career century, but it proved little consolation as the Lions ran out easy winners to join the Hollywoodbets Dolphins and the VKB Knights as Pool B winners in next week’s play-offs.

For the Warriors, their fate will be decided when they take on the Six Gun Grill Cape Cobras on Saturday.

But Robin Peterson’s side will be kicking themselves for not doing better with the bat against the Lions, especially after the strong foundation that was laid for them by Smuts and Wihan Lubbe (60 off 99 balls, 5 fours, 1 six), when they won the toss and opted to bat first.

The two put on a 134-run second-wicket partnership to put their side on course for close to 300 at one stage as the men from the Eastern Cape recovered from the early loss of Matthew Breetzke (5) to reach 156 for one and then 183 for two in the 41st over.

But things went horribly wrong from there with Aaron Phangiso (2/37) dismissing both and Bjorn Fortuin picking up three for 52.

The Warriors ended up losing their last seven wickets for just 64 to end on 247 for nine.

The chase began well for the Lions thanks to some wayward bowling early on as they reached 37 inside the first five over.

But openers Ryan Rickelton (10) and Wesley Marshall (18) fell within the space of four balls, before Reeza Hendricks (15) and Nicky van den Bergh (1) followed with still only 97 on the board.

But Dominic Hendricks and Potgieter ensured there were no further hiccups as they initially consolidated, before cutting loose as the partnership blossomed.

In the end, they batted together for 29 overs and broke the previous fifth-wicket partnership record for the Lions of 144 between Rassie van der Dussen and Dwaine Pretorius against the Knights at Kimberley in 2016/17.

The Johannesburg-based side play their final match of the pool against the Cobras on Friday.