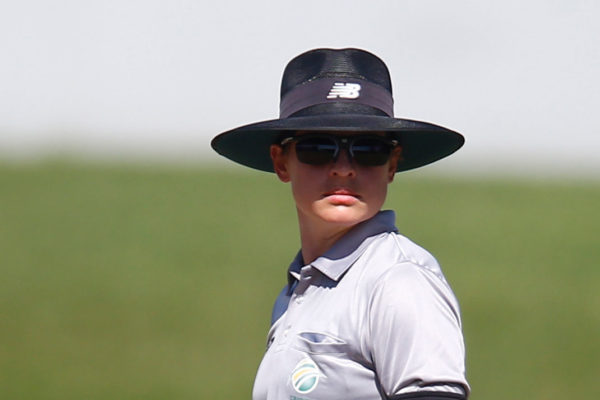 The pair made their debuts during the series, both taking part in all three games that were hosted in a bio-secure environment (BSE) at Hollywoodbets Kingsmead Stadium in Durban.

Umpire Agenbag, 24, is leading the pack amongst the best female umpires in the country, with the latest accolade adding to her glowing CV that saw her become the first female umpire from South Africa to stand in an international T20 series.

Hailing from Centurion in Pretoria, she subsequently went on to become the first CSA female representative to stand in the ICC Women’s T20 World Cup held in Australia last year.

Fritz, 35, meanwhile, is a former Proteas Captain and was the first female to be included in CSA’s panel of match referees. She as well subsequently went on to become the first CSA female match referee to be appointed on to the ICC Panel of Match Referee’s

She was the match referee in all three matches between South Africa and Pakistan, with Agenbag standing in all three, alongside Stephen Harris, Brad White and Lubabalo Gcuma respectively.

“On behalf of CSA, I would like to commend both Lauren and Shandre on their WODI debuts during the series against Pakistan,” CSA Acting Chief Executive Officer, Pholetsi Moseki, stated. “From the reports we are receiving, both of them did excellent jobs and we wish them all the success in the future.

“Their progress as international officials is a huge inspiration for every young girl coming through the system. It shows that with hard work, one can progress not just as a player, but also as an umpire of match referee as well.

“We would also like to thank Stephen Harris, Brad White and Babs Gcuma for their efforts as umpires during the series. Our national match official’s department is doing a wonderful job in preparing their team for the big stage.”

Both Agenbag and Fritz will now be aiming to be part of the ICC Women’s World Cup in New Zealand next year.