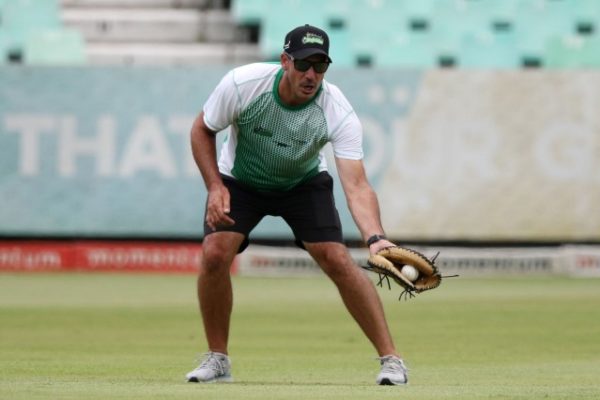 Posted at 09:21h in Domestic by admin@csa

Durban – While the Hollywoodbets Dolphins wait patiently to see who they play in the Momentum One Day Cup semi-final, the coaching team is reflecting on the positives from their unbeaten pool phase of the competition in Potchefstroom.

The men from Durban won both of their completed games in the pool phase which saw them cruise to the top of the pool ahead of the VKB Knights in second and the Momentum Multiply Titans in third.

Talking about the bowling attack and how they performed, bowling coach and assistant coach to the Dolphins Quinton Friend said he was more than happy with how his attack went about their work during the group phase of the competition.

“I thought that the skill level of the guys has been fantastic from the get-go,” Friend said. “There was a period during the second match where we gave away a few too many soft boundaries but we spoke a lot about it.

“I felt that we are a lot better than that because we try and keep things as simple as possible and that is something that we will go back and work on starting on Thursday again.

“Robbie Frylinck has come back into the side and led the attack from the front and impressed once again.

“He is such a good example because he just bides his time and puts the ball in the right areas and he invites the batters to make the play and we feel that that’s the route that we all need to be going as an attack.”

The Dolphins welcomed Ruan de Swart to the set-up at the beginning of the season and the all-rounder has impressed across both red ball and white ball cricket. Friend sees De Swart as a person to go into battle with.

“It’s still early days for him in his franchise career but he comes across as a fighter and someone who will always give everything for the team.

“It’s been fantastic to see what he has brought to the table. He’s a brilliant fielder, a really good batter and he’s proved that he can show his worth with the ball which is a massive positive for us.

“We were in a pickle whether to bat him at six or seven but we thought that putting him in the top three would give him that responsibility because of the type of character he is.”

The three other sides in the competition, the Warriors, the Imperial Lions and the Six Gun Grill Cape Cobras will fight it out for the other two semi-finals spots shortly. Despite not knowing who they will play in the play-off’s Friend knows the Dolphins have things to work on.

“One of the big things for me is that we speak about a formula at the Dolphins and our formula when we play white ball cricket is to get off to a good start and set it up for the big hitters at the back end.

“We showed good signs of that at the back end of the second match against the Knights and we are going to try and focus on just taking care of big moments in games a little bit better,” Friend added.

The semi-finals are set to take place on 1 and 2 February with the final on 4 February.