Roelofsen sets up second win in two for Dolphins 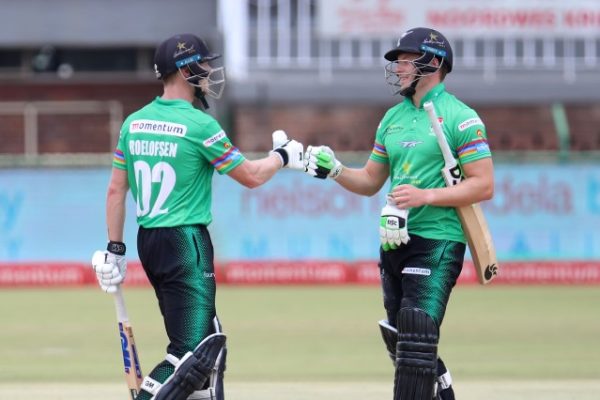 10 Jan Roelofsen sets up second win in two for Dolphins

Posted at 10:03h in Domestic by admin@csa

POTCHEFSTROOM: Grant Roelofsen and David Miller both hit half-centuries as the Hollywoodbets Dolphins completed a superb weekend double by overcoming the VKB Knights in match two of the Momentum One-Day Cup taking place in the bio-secure environment (BSE) in Potchefstroom on Sunday.

The defending champions, who claimed a thumping 76-run bonus-point win over the Momentum Multiply Titans in the competition opener 24 hours earlier, batted first at JB Marks Oval and amassed 290 for eight, before bowling out their opponents for 238.

The veteran all-rounder then led the way with the ball with the outstanding figures of 8-3-14-2, helping the KwaZulu-Natal side dismiss their opponents in 46.1 overs.

That rounded up a strong start to the competition for Imraan Khan’s charges as they charged into command at the top of Group A.

And they were dominant from the outset in Potch, despite suffering an early setback when Marques Ackerman fell to pick-of-the-bowlers Jacques Snyman (2/52) for one in the third over.

But Roelofsen, who struck 65 against the Titans on Saturday, and Ruan de Swardt (36) put on 90 for the second wicket, before the former added a further 74 with Miller for the next wicket.

The Knights then began to claw their way back by picking up regular wickets, although there was nothing they could do when Frylinck exploded at the death. He added 45 with Prenelan Subrayen (16 not out off 9 balls) with the champions setting 291.

The dangerous Snyman (5) then fell to Kerwin Mungroo (1/31) early in the chase dealing a major blow to the Central Franchise, before Patrick Kruger (36) and top-scorer Andries Gous (54 off 61 balls, 5 fours, 1 six) began rebuilding.

The pair had put on 57 for the second wicket when Ottniel Baartman (1/28) struck to remove Kruger.

A 64-run stand then ensued between Gous and Pite van Biljon (33), but both were taken out by the miserly Frylinck within four deliveries of the 27th over.

Those blows proved the turning point as the Knights were forced to rebuild with two new batsmen.

And even though Farhaan Behardien (45) and Wandile Makwetu (17) did their best to rebuild, they too were out within the space of five balls leaving too much on the shoulders of the middle order.

In the end, De Swardt, who ran out Behardien, and Subrayen each collected two for 38 to complete a fine win.