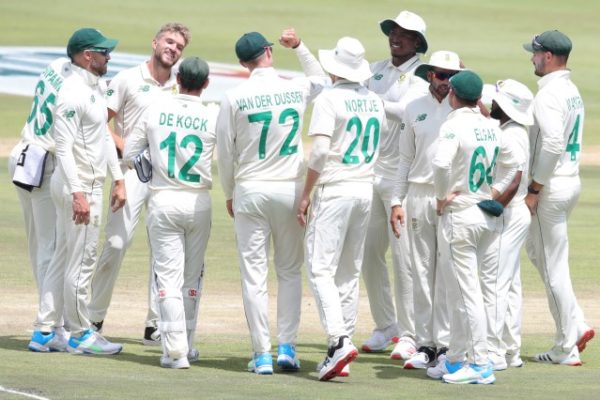 Wiaan Mulder, Lutho Sipamla and Anrich Nortje all claimed two wickets apiece as the Proteas made a winning start to the summer with a clinical innings and 45-run victory over Sri Lanka after lunch on day four of the first Betway Test against Sri Lanka at SuperSport Park in Centurion on Tuesday.

With injuries severely hampering the tourists, the hosts needed just nine second-innings wickets, seven of those on what turned out to be the final day, to close out the win.

The Sri Lankans had resumed the fourth morning on 65 for two and 160 runs short of making South Africa bat again.

They initially started out well as top-scorer Kusal Perera (64 off 87 balls, 10 fours) and Dinesh Chandimal extended their third-wicket partnership to 63 for the third wicket, before Mulder cleaned up the latter for 25.

Niroshan Dickwella lasted 15 balls for his 10 as Mulder struck once more by drawing an edge to Quinton de Kock.

Superb bowling from Nortje then claimed the prise scalp of Perera as the visitors’ hopes of making the home side bat again were severely dented.

Dasun Shanaka (6) and Wanindu Hasaranga (59 off 53 balls, 12 fours, 1 six) were taken out by Sipamla either side of Vishwa Fernando being run out by Keshav Maharaj for a duck, and Nortje dislodged last man Kasun Rajitha without scoring.

That left Sri Lanka all out for 180 and put the Proteas 1-0 up in the two-match series. The second Test match on Sunday, January 3.