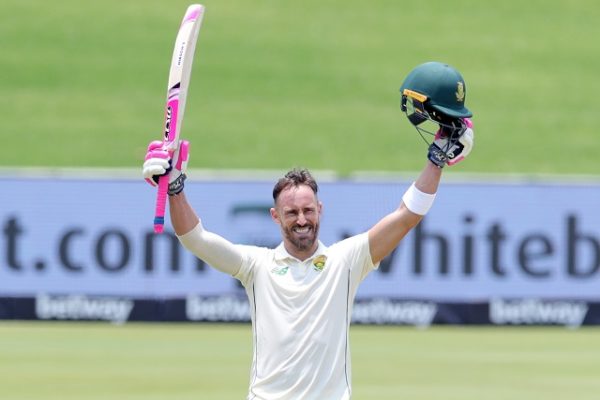 Faf du Plessis fell one short of a double century and Lungi Ngidi nabbed two late wickets as the Proteas took firm control after three days of the first Betway Test against Sri Lanka at SuperSport Park in Centurion on Monday.

The 36-year-old and received excellent support from Temba Bavuma (71 off 125 balls, 7 fours) and Keshav Maharaj (73 off 106 balls, 6 fours, 2 sixes) – the hosts posting their eighth highest Test total ever.

It was also their highest mark against the tourists and biggest team total since they reached 627 for seven declared against England at Cape Town in 2016.

That gave Mark Boucher’s charges an innings lead of 225 and they further drove home their advantage by reducing the visitors to 65 for two by the close thanks to Ngidi’s two for 28 – still trailing by 160.

They started out on the third morning already in a much more confident position on 317 for four, hunting down Sri Lanka’s 396, with Du Plessis and Bavuma extending their fifth-wicket partnership to 179.

Their stand was ended when Bavuma slashed wildly at a Dasun Shanaka deliver and was given out caught behind. He walked without reviewing, a mistake he will rue as replays proved there was no edge.

His dismissal, however, failed to halt the progress of the South Africans as Wiaan Mulder collected his best Test score of 36 during a 75-run stand with Du Plessis, who then added 133 for the seventh wicket alongside Maharaj, another man that posted his best score at this level.

That partnership ended with the dismissal of the former skipper as he disappointingly struck Wanindu Hasaranga (4/171) straight to mid-on Dimuth Karunaratne having collected his 10th career ton and smashed his previous best Test score of 137 recorded against New Zealand at Port Elizabeth in 2012/13.

Maharaj unfortunately lacked the support to push on to three figures as the home side were eventually dismissed in 142.1 overs by a severely depleted and exhausted visiting attack.

Ngidi then cleaned up Karunaratne for six and also dislodged Kusal Mendis for a duck – both inside the first five overs – leaving the Sri Lankans on 22 for two.

But Kusal Perera (33) and Dinesh Chandimal (21) prevented any further damage, although the pair were left with a big job ahead on day four.