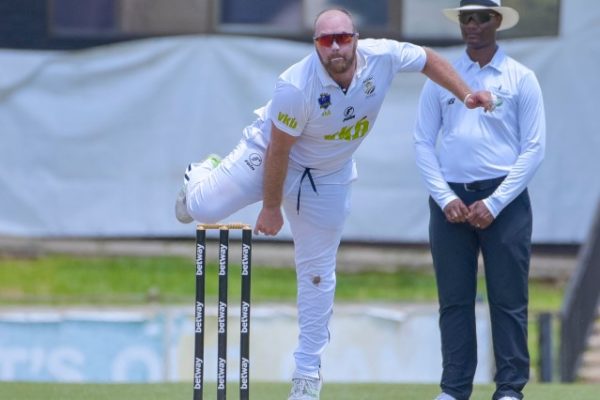 Posted at 10:37h in Domestic, VKB Knights by admin@csa

Shaun von Berg and Duan Jansen shared eight wickets as the VKB Knights made it three home wins from three to move back to the top of the 4-Day Domestic Series table with a thumping nine-wicket win over the Imperial Lions in Bloemfontein on Wednesday.

Debutant Jansen nabbed four for 44 and spinner Von Berg toiled for his four for 68, which gave him nine wickets in the match. The eight wickets taken by the pair ultimately deflated the defending champions for 227 on the final day.

The in-form Dominic Hendricks was the only batsmen to really trouble the home side, but his resistance ended when he was last man out for 98 (205 balls, 11 fours), falling to fast bowler Jansen.

That left the Central Franchise with a paltry target of 18 and they reached that mark in six overs for the loss of Grant Mokoena (8).

It gave Allan Donald’s team a third home win out of three to go with twin losses on the road as they climbed top of their pool.

The Lions started the final day at Mangaung Oval comfortably placed on 43 for two, even though they were still 167 runs behind.

Hendricks and Ryan Rickelton (46) started well by putting on 99 for the third wicket and in the process whittling down the deficit to just over 50.

But after the latter fell to Von Berg, the Knights jumped onto the opening that was offered as Migael Pretorius, who earlier in the day received his maiden call up to the Proteas squad for their upcoming Betway Test Series against Sri Lanka, accounted for Wiaan Mulder (7) cheaply.

Delano Potgieter (12) and Bjorn Fortuin (4) were next in line for spinner Von Berg as the away side suddenly found themselves on 183 for six and still in arrears.

Dominic Hendricks finally found someone to keep out the bowlers at the other end in the form of Beuran Hendricks (18), who he added 36 alongside for the seventh wicket.

But once he fell to Jansen, the other tailenders folded.