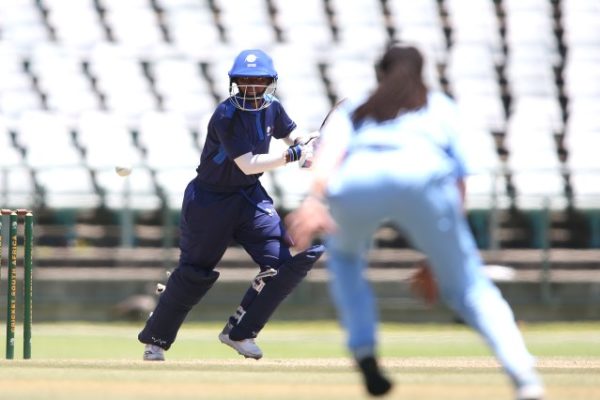 Kgomotso Rapoo and Madison Landman claimed six wickets for 12 runs between them to help Coronations wrap up the Women’s Super League (WSL) with a comprehensive 36-run win over the previously unbeaten Thistles in the final match-up in Cape Town on Wednesday.

Spinner Rapoo recorded stunning figures of three for two in two overs, while fellow slow bowler Landman bagged three for 10 in four overs to leave the competition leaders all out for a woeful 44.

Thistles, who had won their previous two games, were chasing a modest 104 at Six Gun Grill Newlands but their poor batting performance meant they missed out on ending the week unbeaten.

Instead it was Coronations that walked away with the points despite limping to 103 for nine after winning the toss and batting.

Laura Wolvaardt (25) and Tazmin Brits (13) gave their team a good start with 31 for the opening wicket, but Tumi Sekhukhune returned three for 21 in her four overs to jolt their progress.

Nadine de Klerk (30), the only other batter to score double figures, did help Adele van Eck’s team rebuild and they were in a decent position to launch a late assault at 84 for four in the 17th over.

But Shabnim Ismail (1/17) kept things tight at the death alongside Sekhukhune to restrict the target to just over 100.

That proved too big an ask, though for Thistles as their batters failed to deal with the determined Coronations attack.

Apart from Rapoo and Landman, Jane Winster (2/7) and Nonkululeko Mlaba (1/11) also proved almost impossible to score off as they ruthlessly dismissed their opponents with 20 deliveries to spare.

Trisha Chetty (23 off 34 balls) was the only player to reach double figures in a poor batting effort from Angelique Taai’s charges.

The second leg (March 2021) of the Women Super League will be held in Johannesburg at the Imperial Wanderers where this season’s champion will be crowned.