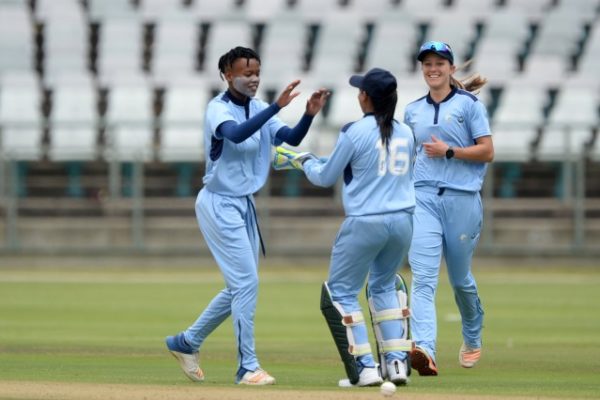 An outstanding four for 18 by Nobulumko Baneti helped Thistles maintain their 100 percent winning record at the Women’s Super League (WSL) on Tuesday after they eased to a 36-run victory over Duchesses in Cape Town.

Jade de Figuerido (3/23) and Shabnim Ismail (2/15) also excelled for Angelique Taai’s charges as they became the first team to bowl out the opposition, blowing them away for 112 during their pursuit of 149 at Six Gun Grill Newlands.

Earlier Trisha Chetty (45 off 37 balls) and Nonkululeko Thanbethe (43 off 50 balls) shared in a first wicket partnership of 90 to set the Thistles on their way to the biggest score of the week in match four of action.

Their captain Tumi Sekhukhune won the toss and batted first, with the openers in excellent form during their 13-over stay together.

The stand was eventually broken by Monalisa Legodi (1/14), but Anneke Bosch (16) and Eliz-Mari Marx (9) ensured their side finished strongly to post 148 for four in their 20 overs.

Paulinah Mashishi (1/12) was the pick of the bowlers for the Duchesses, who then found themselves in early trouble when key batter Faye Tunnicliffe was run out first ball for a duck following a mix-up with Gandhi Jafta (23).

That brought captain Sune Luus to the middle, and long with Jafta, the pair added 37 for the second wicket to get the chase going.

However, De Figuerido dismissed the latter, followed by Michaela Kirk (12) and Sinalo Jafta (7) as the Duchesses began to crumble.

And when skipper Luus fell to the seam of Baneti with the total on 97, it left her side with a mountain to climb.

The Thistles’ star bowler and Ismail then ran through the tail to leave their opponents all out in 18.2 overs.

The final day of WSL 3.0 takes place on Wednesday. All the matches can be watched live on the CSA YouTube channel.