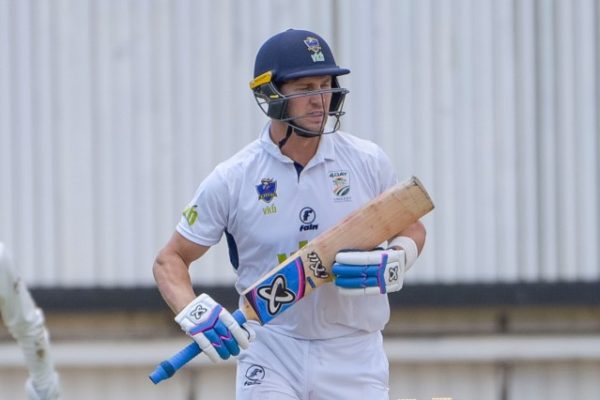 Posted at 12:15h in Domestic, VKB Knights by admin@csa

Raynard van Tonder recorded the first double century of the 4-Day Domestic Series season and also crossed the 600-run mark as the VKB Knights enjoyed another fruitful display on the second day of action against the Imperial Lions in Bloemfontein on Monday.

There was also an impressive debut 96 (191 balls, 8 fours, 2 sixes) from Ferisco Adams, who was last man out when the Central Franchise were dismissed in 140.2 overs.

Shaun von Berg then claimed two for 36 as the defending champions reached stumps on 124 for two – still trailing by 348.

Day two, though, was all about the form of Van Tonder as the former South Africa Under-19 captain continues to pile on the runs.

He was unbeaten overnight on 180 and his side 327 for six, before taking them to 373 when he was finally dismissed by Beuran Hendricks (1/77) after scoring his second double century in just his 17th game.

But Adams, playing in only his second franchise match and first since making a winter move from the Six Gun Grill Cap Cobras, managed to still add another 99 with the tail.

Amongst those runs were 80 with another debutant Duan Jansen (30) for the ninth wicket that gave the home side a big first-innings score. Wiaan Mulder (2/68), Tladi Bokako (2/74) and Lutho Sipamla (2/75) all bagged two wickets each.

Dominic Hendricks (39) and Joshua Richards (25), who was forced to retire hurt, gave the Lions a good start of 84.

However, Von Berg’s quick double put the Knights back ahead, before an unbroken stand of 29 between Rassie van der Dussen (23) and Wesley Marshall (22) took their side to the close.