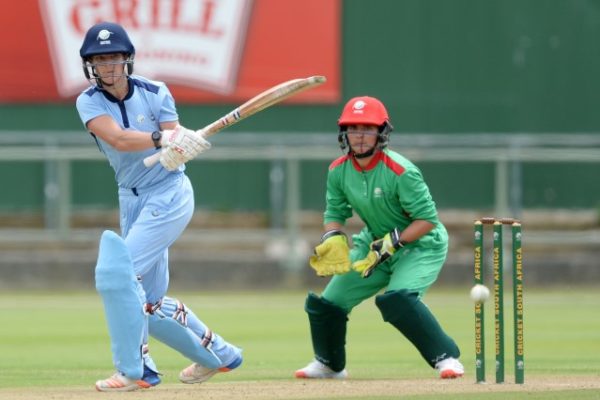 A dashing half century by Anneke Bosch helped the Thistles make a flying start to the Women’s Super League (WSL) after they claimed an 11-run win in their opening match against the Starlights at Six Gun Grill Newlands in Cape Town on Monday.

Khayakazi Mathe also played an important role with three wickets to help Angelique Taai’s charges to an important result as women’s cricket made its first return since Covid-19 struck South Africa way back in March.

The December 14-16 event was therefore highly anticipated by all those involved, which included most of the Momentum Proteas, who were all split amongst the four squads when the WSL 3.0 Virtual Draft took place at the start of the month.

However, there were many unknows too who made an impact in match one.

After Thistles captain Tumi Sekhukhune won the toss and opted to bat first, they lost Trisha Chetty (2) early, with Nonkululeko Thanbethe (7) and Alexandra Candler (4) following without making too much of an impact.

It was 44 for three at that stage with Eliz-Mari Marx then offering good support to Bosch during 41-run fourth wicket stand, which ended with the latter dismissed for 51 off 45 balls (7 fours) by pick of the bowlers Masabata Klaas (3/16).

Marx (21 not out) batted out the closing overs to help her side post 100 for six.

The reply was not a good one by the Starlights after they slumped woefully to 39 for eight just after the halfway mark – Mathe doing most of the damage with three for 16.

Khushi Mistry (34 not out off 44 balls) and Tatum Le Roux (20) did add some respectability to the scoreboard by sharing in a fighting ninth wicket half century stand, but the total proved too tall for them as their side ended on 89 for nine, handing Thistles victory.

All the matches in the WSL 3.0 can be watched live on the CSA YouTube channel.