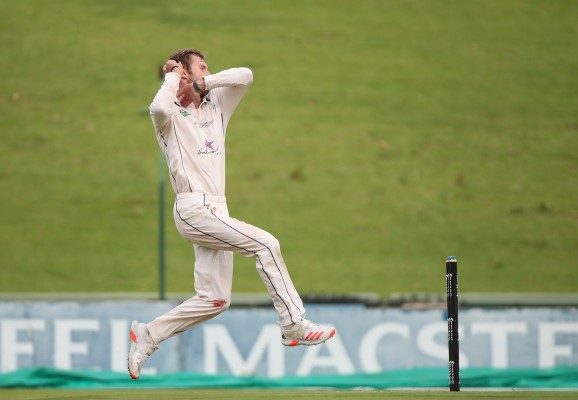 Posted at 13:08h in Domestic by admin@csa

There were more runs from Aiden Markram while Dean Elgar returned to form but the Momentum Multiply Titans were kept in check by a disciplined Hollywoodbets Dolphins attack on the opening day of their 4-Day Domestic Series encounter in Centurion on Sunday.

The hosts reached stumps on 269 for nine at SuperSport Park, despite their openers both hitting half-centuries in a strong opening stand that was worth 116. This after captain Theunis de Bruyn won the toss and opted to bat first.

However, Ruan de Swardt (4/41) and Keshav Maharaj (4/48) shared seven wickets to help the visitors claw their way back in the top-of-the-table round five clash.

Markram was named in the Proteas squad this past week on the back of a superb start to the campaign, which had seen him score three hundreds in his previous three innings, and he followed that up by top-scoring with 75 (150 balls, 7 fours, 2 sixes).

Elgar, who struggled in the last two games after his strong start to the term, supported his team-mate well with 52 (83 balls, 8 fours).

However, after both fell, the Titans struggled as they slipped to 206 for six with De Swardt proving the chief tormenter against his former franchise thanks to his career-best figures.

Dayyaan Galiem did launch a later counter-attack with 45 not out off 48 balls to at least help his side cross the 250 mark.

Maharaj’s late double swayed things back in favour of the Dolphins, though, as they ended the day in the ascendency.