Titans and Cobras all even after Markram, Brand tons 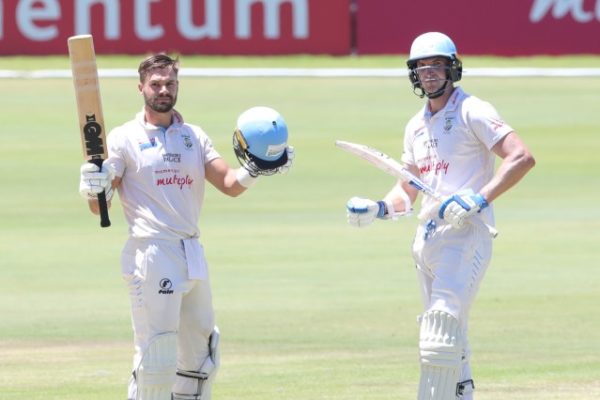 02 Dec Titans and Cobras all even after Markram, Brand tons

Posted at 14:03h in Domestic by admin@csa

Aiden Markram’s third century in three innings together with a career-best ton from Neil Brand ensured the Momentum Multiply Titans and the Six Gun Grill Cape Cobras were almost inseparable after three days of their 4-Day Domestic Series encounter in Centurion on Wednesday.

Brand, playing in his seventh franchise match, bettered his career-best 106 recorded against the Hollywoodbets Dolphins at the same venue last season with 115 (278 balls, 17 fours) as the Titans were dismissed late in the day.

There was also an attacking 55 off 54 balls (7 fours, 2 sixes) by Sibonelo Makhanya, while Calvin Savage finished as the pick of the bowlers with five for 77.

The Cobras then faced nine overs in their reply, reaching 33 without loss and a lead of four.

But the day was mainly about Markram as he continued his rich run of form with a 14th career ton.

Brand too made his mark as he completed his third hundred in first-class cricket – the pair starting the day together at 136 for one and extending their partnership to 178 for the second wicket by the time it was broken by Savage with the score on 210.

Pieter Malan (12) and Jonathan Bird (19) faced a tricky 40 minutes before the close, ensuring there was no drama as the two teams cancelled each other out.