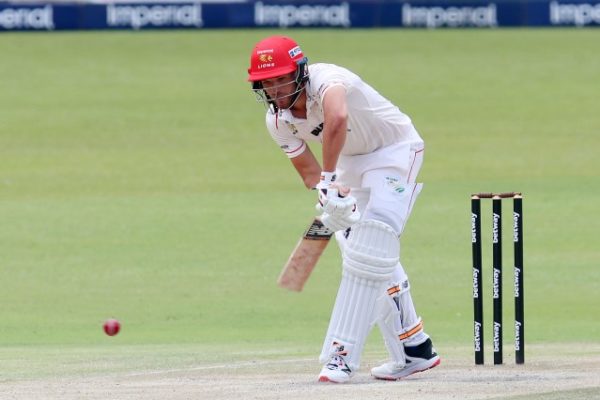 Posted at 13:58h in Domestic by admin@csa

Wiaan Mulder’s attacking century followed by some key strikes by the Imperial Lions’ bowlers helped the defending champions close in on victory over the Warriors after three days of their 4-Day Domestic Series encounter in Port Elizabeth on Wednesday.

He then grabbed one for 28 that was part of a sustained bowling display which left the home side on 219 for five – chasing 513 – at the close.

It was Mulder’s fifth career century and followed on from his 91 in the first innings as the Lions continued to dominate.

Even though the Warriors fought hard in the second innings through their captain Yaseen Vallie’s 85 (137 balls, 15 fours) and an unbeaten 76 (149 balls, 9 fours) by Rudi Second, they were still struggling to save the game by the close.

The Johannesburg-based visitors had started the day batting on 125 for three and they batted with intent for a little over 20 overs to add 116 before declaring.

Mulder and Ryan Rickelton (59 off 115 balls, 6 fours, 1 six) were the only real contributors during a fourth-wicket stand that yielded 93.

The Warriors then found themselves in trouble from the outset after the out-of-form Eddie Moore was dismissed by Sisanda Magala (2/54) for four.

Matthew Breetzke (23) added 75 with Vallie for the second wicket, before falling leg before wicket to Malusi Siboto (1/32).

The skipper then put on 82 with Second, but that stand was crucially broken, again by Magala.

Two more quick wickets – those of Wihan Lubbe (4) and Sinethemba Qeshile (13) – sunk the locals into further trouble, leaving Second to fight a lone battle at the close.