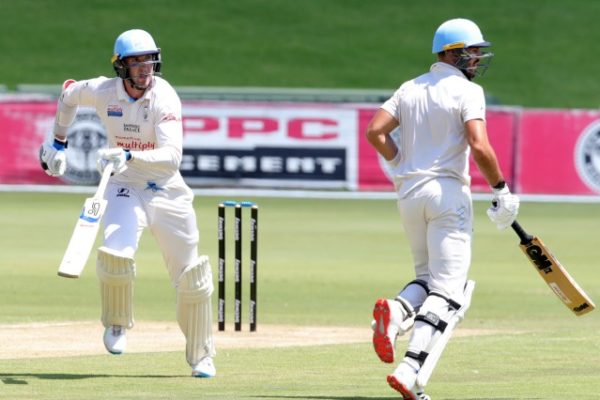 Posted at 14:17h in Domestic by admin@csa

Aiden Markram was closing in on another 4-Day Domestic Series century as the Momentum Multiply Titans hit back on a rain-hit second day of their clash against the Six Gun Grill Cape Cobras in Centurion on Tuesday.

The dashing right-hander, fresh from back-to-back tons in the previous game against the Warriors, was unbeaten on 80 (123 balls, 13 fours) when afternoon thundershowers brought an end to proceedings more than 30 overs early at SuperSport Park.

The homes side, who were replying to a total 411 by the visitors, eventually ended the day on 136 for one – trailing by 275.

Markram was being kept company by Neil Brand (34) after the pair added an unbroken 106 for the second wicket. This after Dean Elgar fell early on for nine, dismissed by Corbin Bosch (1/22).

It was nonetheless a good end to the day for the Titans after they started it by claiming the remaining five Cobras wickets for 60.

Okuhle Cele (2/81) and Thando Ntini (3/66) were the main wicket-takers on the second morning, with both grabbing two wickets apiece.

Nandre Burger (5) was next to go at the hands of Lizaad Wiliams (2/89) and Ntini wrapped things up by sending Bosch packing after a troublesome 28.

The Cobras then made a good start with the ball after Bosch got rid of Elgar in the eighth over of the innings.

But that proved to be their only success on the day as Proteas opener Markram, together with support from Brand, dominated until rain brought a premature end to proceedings.