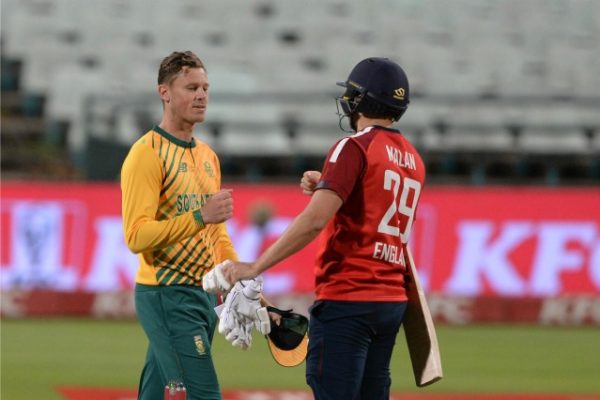 Dawid Malan’s unbeaten 99 in a record partnership helped England complete a 3-0 series sweep over the Proteas with a nine-wicket win in the final KFC T20 International in Cape Town on Wednesday.

The world’s top-ranked batsman shared in a record partnership T20I partnership of 167 with Jos Buttler (67 off 46 balls, 3 fours, 5 sixes) as the tourists completed the highest-ever chase at Six Gun Grill Newlands – hunting down the 192 target with 14 deliveries to spare.

It was an unfortunate end to the series for the hosts, who themselves did exceptionally well with the bat thanks to Rassie van der Dussen’s career-best 74 off 32 balls (5 fours, 5 sixes) and 52 off 37 balls (5 fours, 3 sixes) by Faf du Plessis, who was making his 50th appearance for South Africa.

The two put on an unbroken 127 for the fourth wicket in 10.3 overs with Van der Dussen’s effort beating his previous highest score of 64 against Sri Lanka at Centurion in 2018/19.

His third career 50 was well supported by a 10th career half-century by Du Plessis as the pair bettered the record fourth wicket stand of 110 for South Africa that had been set by AB de Villiers and Farhaan Behardien against England at Southampton in 2017.

But without the injured Kagiso Rabada, who has subsequently been ruled out of the upcoming one-day series due to injury, the home attack toiled and eventually succumbed to their worst defeat of the series despite amassing their highest total.

Captain Quinton de Kock had earlier won his first toss of the series and opted to bat first.

But the trend of the previous two games continued as wickets fell early on – the skipper out for 17, followed by Temba Bavuma (32) and Reeza Hendricks (13).

Van der Dussen and Du Plessis, however, made amends, and after a slow start to their partnership, they cut loose by demolishing the England attack.

They took 84 runs from the last five overs, the most ever conceded by Eoin Morgan’s side in a T20I, on their way to 191 for three.

But the visitors were ruthless in response. Apart from Anrich Nortje (1/37) trapping the out-of-sorts Jason Roy leg before wicket for 16, and George Linde (0/26) sending down a tidy four overs, not much else went the way of the South Africans.

Rabada’s replacement Sipamla, playing his first competitive game since March, went for 45 in 2.4 overs, while the usually miserly Tabraiz Shamsi conceded 57 in his four overs as Malan, who smasged five sixes and 11 fours in his 47-ball blitz, and Buttler cut loose.

In the end, England finished things off by claiming their most comfortable win of the series and beating the record high score of 183, which they themselves recorded in match one, to win a game batting second at Newlands.

Proteas squad for the KFC T20I series vs England