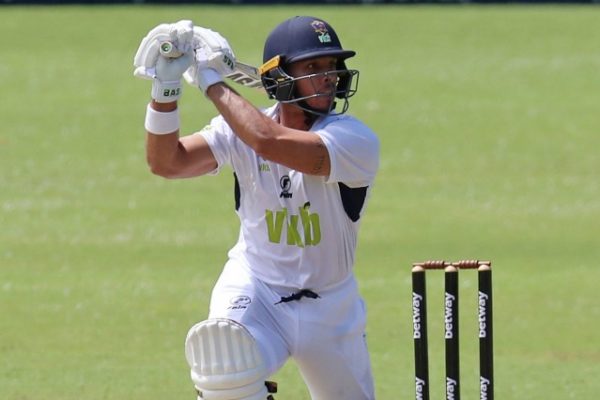 Posted at 14:22h in Domestic, VKB Knights by admin@csa

A century second-wicket stand between Matthew Kleinveldt and Raynard van Tonder helped the VKB Knights fight back on a murky day two of their 4-Day Domestic Series encounter against the Hollywoodbets Dolphins in Durban on Tuesday.

The pair batted for more than 40 overs together as the Central Franchise reached stumps on 150 for two – a lead of 13 at Hollywoodbets Kingsmead Stadium.

This after the home side had earlier taken their overnight score from 169 for seven to an impressive 253, which was built around Grant Roelofsen’s 73 (106 balls, 9 fours, 2 sixes) and 44 by Prenelan Subrayen.

Their efforts ensured the KwaZulu-Natal outfit held a strong 137 advantage at halfway, although the Knights’ top three dug deep to all erase that lead.

On an overcast day in Durban, the hosts resumed with Roelofsen still there and he helped them reach nearly 200 before becoming the first wicket to fall when Mbulelo Budaza (1/57) struck.

Daryn Dupavillon added an important 19, with Subrayen eventually last man out to Shaun von Berg (1/31). The pick of the bowlers was Patrick Botha with three for 35.

Jonathan Vandiar (34) came out attacking for the Knights and put on 45 for the opening wicket with Kleinveldt, before he was dismissed by Lifa Ntanzi (1/20).

But his partner was solid at the other end and batted out the rest of the day with his unbeaten 67 off 170 balls (11 fours). Van Tonder also went strong alongside him, posting 46, before finally falling with less than three overs of the day remaining.

He was dismissed by Senuran Muthusamy (1/32), but Botha stayed put at the other end to help the Knights close in a much better position than day one.