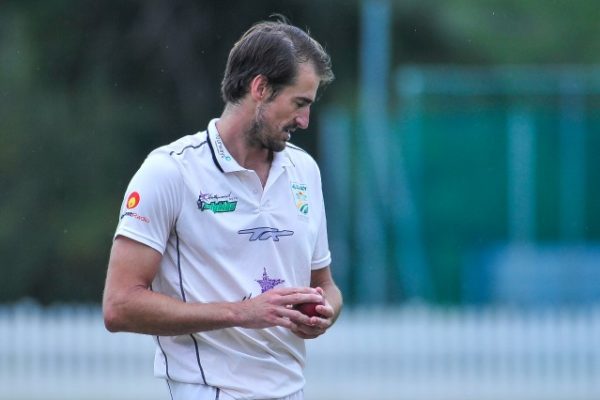 Posted at 14:31h in Domestic, VKB Knights by admin@csa

Daryn Dupavillon claimed a career-best seven wickets on his maiden appearance of the new season as the Hollywoodbets Dolphins enjoyed the better of a busy day one of their 4-Day Domestic Series encounter against the VKB Knights in Durban on Monday.

The Proteas fast bowler, who missed the first three rounds of the campaign, recorded an outstanding seven for 38 – his best figures at this level – with his strikes amongst 17 wickets to fall at Hollywoodbets Kingsmead Stadium.

The visitors were shot out for a woeful 116 with Gerald Coetzee then nabbing three for 38 as the hosts closed on 169 for seven.

Only one batsman managed to score a half-century on the day, with that honour belonging to the previously out-of-sorts Grant Roelofsen after he ended unbeaten on 64 (86 balls, 7 fours, 2 sixes).

When the day eventually concluded, the home side lead by 53 and the match had already advanced by a rapid pace due to events on the east coast.

It was a surprising day all round, considering the opening two matches at the venue were dominated by the bat in the first innings.

However, it was a completely different story this time after the Central Franchise won the toss and opted to bat first.

After the early loss of Matthew Kleinveldt (9), the Durban batting trend appeared to be continuing after Jonathan Vandiar (39) and Raynard van Tonder (24) took the total to 70 for one.

But things unraveled badly from there as Dupavillon made merry with his best franchise haul that surpassed the five for 38 he took against the Knights at Kimberley in 2014/15. Five of his wickets were bowled and the Knights ended up losing nine wickets for 46. Senuran Muthusamy grabbed two for 15.

Coetzee’s brilliance with the new ball then cut through the heart of the Dolphins’ batting as they slipped to 17 for three in the fourth over, with the young speedster also running out Marques Ackerman (22) a few overs later leaving the score on 52 for four.

But Roelofsen, who had been in wretched form during the opening three rounds, together with Khaya Zondo (35) and then Mangaliso Mosehle (19) hauled the home side out of trouble and into the lead.

A twin strike by Patrick Botha (2/32) did not allow for a complete recovery with the Knights fighting to the close.