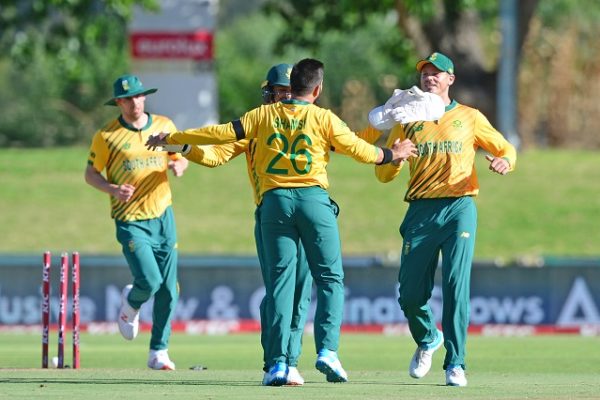 Dawid Malan’s half-century on a slow Eurolux Boland Park pitch proved to be the major difference as England claimed a four-wicket win over the Proteas in the second KFC T20 international in Paarl on Sunday.

The result ensured the tourists claimed victory in the three-match series after moving into an unassailable 2-0 lead ahead of game three on Tuesday.

It was hugely unfortunate for the South Africans, who put up a strong fight despite posting a modest 146 for six on a sluggish surface – where Quinton de Kock top-scored with 30 off 18 balls.

George Linde also hit 29 off 20 balls, while Rassie van der Dussen faced 29 deliveries for his unbeaten 25 that included not a single boundary. In fact the pair, together with Malan, were the only players to face 20 deliveries or more in the match.

But the real star for the hosts was Tabraiz Shamsi after his career-best three for 19 put the squeeze on the tourists and took the game down to the wire, before they eventually crossed it with a delivery to spare.

Defeat was tough on the home side, but they will feel they should have got a few more runs even though none of their batsmen really managed to settle.

De Kock, who lost the toss and was put in to bat first, and Temba Bavuma (13) both fell inside the powerplay overs.

Reeza Hendricks (16) and Faf du Plessis (11) were dismissed either side of the 10 over mark, both removed by excellent Adil Rashid (2/23) deliveries, before Heinrich Klaasen (7) followed.

The Proteas’ lack of batting depth meant that all-rounder Linde and Van der Dussen could not take too many risks, the home side having to settle for a below-bar target of 147.

The South Africans had their chances to put England under pressure with the ball, but they did not take them.

In the second over, Jos Buttler (22) survived a run-out chance when Bavuma missed the stumps with an accurate throw that bounced over and during an eventful third over sent down by Nortje, Jason Roy (14) was given out leg before wicket – but at the last minute reviewed and survived.

Rabada then dropped Buttler diving to his right at mid-on.

But there was no escape for Roy when Lungi Ngidi (2/51) came in to bowl and he finally fell for 14, skying the fast bowler to Klaasen on the edge of the circle.

Buttler and Jonny Bairstow (3), Friday night’s Player of the Match, followed in successive overs by the outstanding Shamsi, who could have had a third wicket in his third over when Stokes survived a strong shout against him for LBW, the umpire giving it not out, the hosts going upstairs and umpires call sparing the all-rounder.

Shamsi, a champion bowler for Paarl Rocks when they won the Mzansi Super League 2.0 last year, did eventually get rid of Stokes for 16.

But Malan, the former Paarl Boys High School graduate who made his first-class debut at the same venue nearly 15 years ago, scored 55 off 40 balls (7 fours, 1 six) and shared 51 with Eoin Morgan (26 not out) to seal the win.

Proteas squad for the KFC T20I series vs England