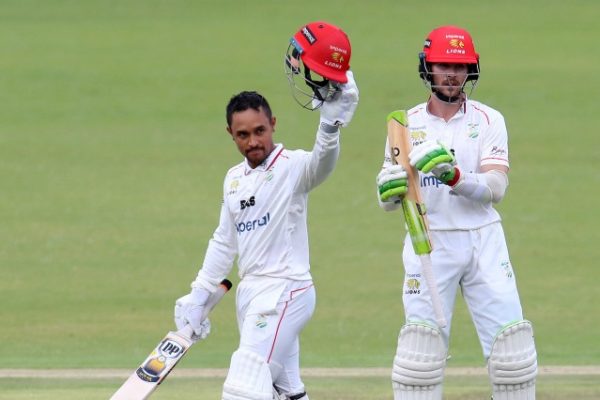 Posted at 14:46h in Domestic by admin@csa

A record opening partnership between Joshua Richards and Dominic Hendricks helped Imperial Lions get their 4-Day Domestic season going with an excellent four-wicket win over the previously unbeaten VKB Knights in Johannesburg on Thursday.

The pair were in outstanding form with both hitting centuries in a stand worth 256 at the Imperial Wanderers Stadium – the defending champions chasing down a daunting 334-run target midway through the afternoon session on day four.

Rookie Richards was eventually dismissed for 136 (181 balls, 19 fours, 1 six), which was his maiden franchise century, while the experienced Hendricks recorded his 16th first-class century before falling for 119 (217 balls, 16 fours).

Their partnership beat the previous opening partnership for the Lions of 226 set by Stephen Cook and Reeza Hendricks against the Cape Cobras at Potchefstroom back in 2017/18.

In the end, it was a fine chase by Wandile Gwavu’s side, who have endured a difficult start to the season by losing their opening match heavily to the Hollywoodbets Dolphins and then failing to close out victory over the Six Gun Grill Cape Cobras in a drawn round two fixture.

Richards and Hendricks had started the last day together, both in their 80s, and the home side still needing 168 for victory.

But they kept their cool most of the way by taking their side to within 78 of the target before the stand was broken by debutant Andrew Rasemene (3/44).

Hendricks was first to go followed by his partner five runs later, but 20s from Ryan Rickelton (22) and Wesley Marshall (20) were just about enough to carry their side close to the finish line.

Despite a late wobble, aided by a double strike from Gerald Coetzee (2/81), the hosts reached the target in 85.5 overs – securing a first win and ending the Knights’ two-match winning sequence in the new campaign.