Muthusamy shines but Cobras hold out for draw 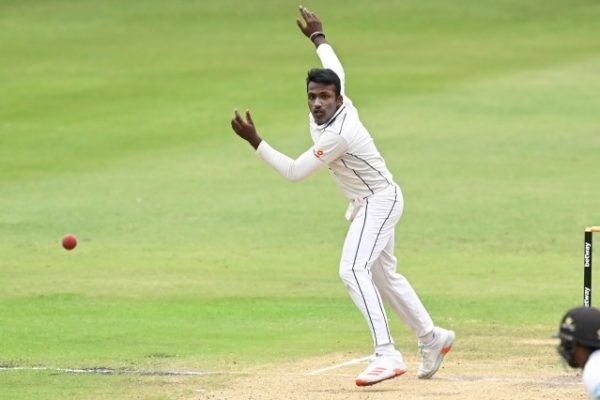 26 Nov Muthusamy shines but Cobras hold out for draw

Posted at 14:42h in Domestic by admin@csa

Senuran Muthusamy hit a half-century and claimed four wickets but it was not enough for the Hollywoodbets Dolphins to force victory on the final day of their 4-Day Domestic Series encounter against the Six Gun Grill Cape Cobras in Durban on Thursday.

Instead, they had to settle for a draw after defiant batting by Pieter Malan and Aviwe Mgjima prevented any drama and ensured the visitors concluded the match on 155 for six – chasing a final day victory target of 295 at Hollywoodbets Kingsmead Stadium.

Earlier Muthusamy was one of three batsmen to hit 56s as the hosts declared on 217 for four.

The Dolphins, who started day four on 55 for none, scored quickly initially as Erwee looked for quick runs.

But once he fell, the tempo slowed down slightly until Ruan de Swardt came in and smashed a quick-fire 32 off 30 balls that allowed for the home side to declare at lunch. Mgjima (4/70) claimed all the wickets for the Cape side.

The response went steadily until Muthusamy, who bagged four 58 in the first innings to go with his four for 56 in the second, dismissed both Isma-eel Gafieldien (18) and Zubayr Hamza (0) in successive deliveries to leave the score on 30 for two.

But Malan (45) dropped anchor at the other end until he too succumbed to the spin of Muthusamy shortly after the 100 was raised.

But Mgjima (36) and Calvin Savage (23) repelled the spin attack of the home side, and even though both fell before the close, time ran out for the Dolphins as they had to settle for a first draw of the campaign. They won their first match, before losing the last one away at the VKB Knights.

For the Cobras, it was the second successive draw after defeat in round one to the Momentum Multiply Titans.