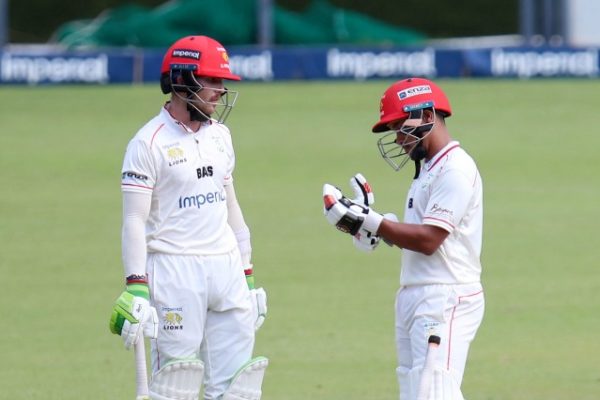 Posted at 14:48h in Domestic by admin@csa

A fixture record opening stand between Dominic Hendricks and Joshua Richards put the Imperial Lions on track for a first win of the 4-Day Domestic Series season after they reached stumps on 166 for none against the VKB Knights in Johannesburg on Wednesday.

Left-hander Hendricks was unbeaten on 80 (138 balls, 11 fours) and right-handed rookie Richards, playing just his seventh franchise game, was with him on 82 (120 balls, 11 fours, 1 six) as the reigning champions came out firing in their final innings.

They were chasing down a target of 334 at the Imperial Wanderers Stadium where the visitors, who have won both their matches so far this season, had dominated for large parts of the game.

But day three undoubtedly belonged to Wandile Gwavu’s side after they made excellent gains – having been behind at the start when the Central Franchise resumed on 111 for one.

Delano Potgieter (4/41) and Wiaan Mulder (3/48) shared seven wickets to ensure the next nine wickets fell for only 124.

Jonathan Vandiar finished as the top-scorer in the second innings for the Knights with 68 (108 balls, 11 fours), while Raynard van Tonder scored 47 – the pair having shared 106 for the second wicket.

But it all went wrong from there as Mulder and Potgieter made merry. The only other batsmen to reach double figures in the innings were Andries Gouws (32) and Grant Mokoena (28) as the away side were bowled out for 235.

The Lions then batted for 43 overs without losing a wicket as Richards and Hendricks took them to within 168 runs of victory.

Their opening stand also bettered the previous fixture record of 146, which they themselves made at the same venue last season.