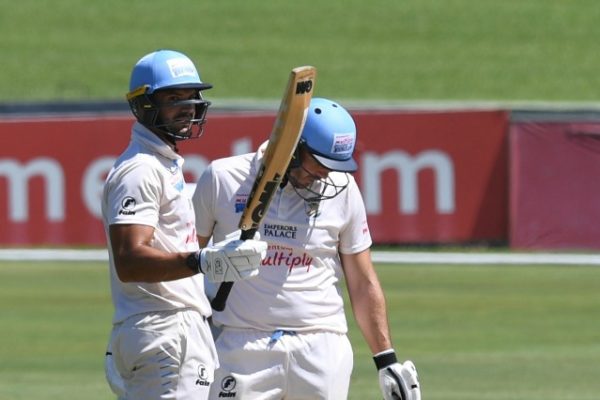 Posted at 14:52h in Domestic by admin@csa

Aiden Markram’s second century in the match played a pivotal role and helped the Momentum Multiply Titans stay in the fight after the third day of their 4-Day Domestic Series clash against the Warriors in Centurion on Wednesday.

The Proteas batsman followed his 149 in the first innings with an equally important 121 (193 balls, 14 fours) that ensured his side were still batting at the close, which they reached at 265 for seven.

That gave them a lead of 193, but also left the visitors knowing that they had every chance of a victory push if they can claim the three remaining wickets early on the final day.

The opportunity was set up by another all-round showing with Sinethemba Qeshile first doing the business with the bat, followed by Marco Jansen and part-time spinner Lesiba Ngoepe delivering with the ball.

The former managed to add 72 with the tail at the start of the day, before eventually falling three runs short of what would have been a deserved century at SuperSport Park.

He was dismissed for 97 (175 balls, 11 fours) after initially putting on 40 with Jansen (24) for the seventh wicket. Fifteen by Mthiwekhaya Nabe also helped the Warriors’ course, while Qeshile was finally the last man out with his side 72 ahead.

Okuhle Cele ended as the pick of the home bowlers with four for 88.

Jansen, who returned three for 48, then struck some crucial early blows to leave the Titans on 33 for three, before Sibonelo Makhanya (23) initially helped Markram pull them out of trouble.

Rivaldo Moonsamy’s 43 continued the rebuilding job during a 95-run stand with Markram for the sixth wicket, but both fell to pick-of-the-bowlers Ngoepe (3/25) before the close.

Dayyaan Galiem (20) then held up the Warriors before the close leaving the match finely poised heading into day four.