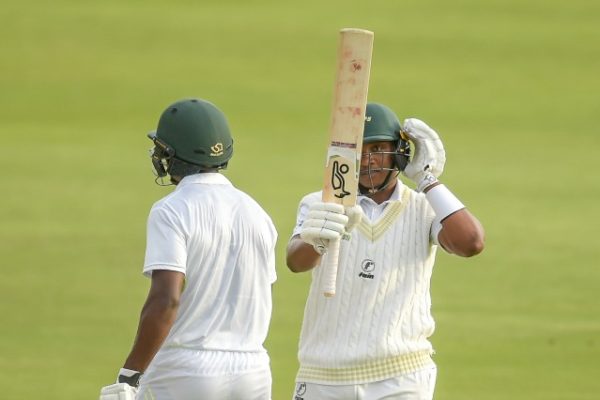 Posted at 14:55h in Domestic, Warriors by admin@csa

Yaseen Vallie, Sinethemba Qeshile, Matthew Breetzke and Lesib Ngoepe all recorded half-centuries as the Warriors finally got their season going with the bat with a strong display against the Momentum Multiply Titans on day two of their 4-Day Domestic Series encounter in Centurion on Tuesday.

The men from the Eastern Cape have been beset by problems so far this term, but they showed no signs of those issues by posting a strong 319 for six at SuperSport Park where they had earlier claimed the final four home wickets for 48.

That helped them bowl out the Titans for 320 and the solid reply, led by their quartet, ensured they were only trailing by one run at the halfway stage of the game.

The day had started with the hosts still in a strong position – Aiden Markram was not out on 149 and hoping to build on the 272 for six from day one.

But the Proteas batsman fell to the first ball that he faced, dismissed by Marco Jansen (3/69) having faced 190 balls, which included striking 27 fours and one six.

The Warriors, who were hit by Covid-19 on the eve of their first match, batted well throughout the reply as Breetzke and Eddie Moore (17) put on 45 for the first wicket, followed by 48 between the former and Vallie.

Other key stands involved 55 between the skipper and Rudi Second (25) for the third wicket, a 67-run fifth-wicket Vallie-Ngoepe partnership and 93 shared by the latter and Qeshile that ended in what turned out to be the final over of the day.