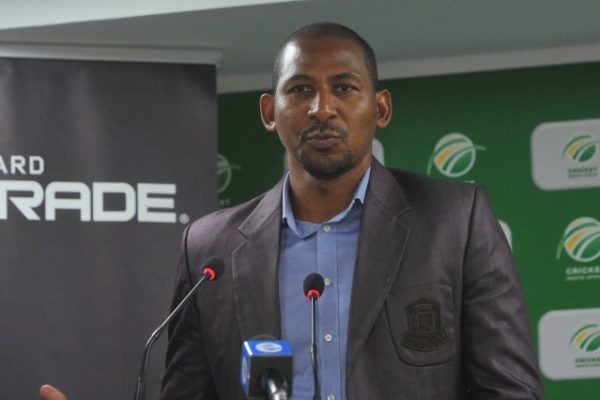 Cricket South Africa (CSA) is pleased to announce that Victor Mpitsang has been appointed as the new National Convenor of Selectors. The position is a full-time appointment which will commence on 02 November 2020.

Mpitsang’s cricket career features two One-Day International appearances for the Proteas before injury curtailed his international ambitions. He bounced back and ended his career with 103 First-Class, 100 List A and 23 T20 matches under his belt when he announced his retirement in 2012.

Retirement from playing the game did not end his interest, however. The 40-year-old who hails from Kimberley, has an impressive record of roles that that span various areas of the cricket landscape over the last eight years.

He began with a position as scout for the schools cricket programme in search of the next few generations of South Africa under-19s (SA U19s) before moving on to become the bowling consultant for the Momentum Proteas women. He coupled that with a selector position for the South Africa Universities programme and assistant coach of the SA U19s before stepping into the role of selector and eventually, Convenor of selectors for the same team, unearthing future Proteas, some of whom include Lutho Sipamla, Wiaan Mulder and Kyle Verreynne. Other young, up and coming players who came through during his time in the role include: Wandile Makwetu, Thando Ntini, Gerald Coetzee, Raynardt van Tonder, Akhona Mnyaka and Matthew Breetzke. All of this was over and above his current position as cricket commentator for CSA’s broadcast partner, SuperSport.

CSA Director of Cricket, Graeme Smith is pleased with the choice that he and the interviewing panel have made. He said:

“The role for the National Convenor of Selectors is an incredibly important one, which is why the process of appointing the eventual candidate has taken so long. We needed to be certain that we have left the role in the safest hands possible and Victor’s credentials speak for themselves.

“He has made it his business to know the ins and outs of cricket after his playing days, from KFC Mini-Cricket, all the way to the senior Proteas men’s and women’s teams. His experience as a coach in our various development programmes means that he has the kind of knowledge and context that was crucial in our chosen candidate.

“I’m looking forward to seeing what he brings to the role and the stamp that he will put on our national teams and I know he is excited to get down to business as soon as he possibly can.”

Mpitsang is delighted to be appointed and expressed his eagerness in getting started at the beginning of next month.

“It’s an honour to be called up for this role,” he commented. “For the last eight years since my retirement, I have consciously looked to learn as much as I can about this game and I have put in many hours gaining that knowledge and experience.

“When you retire from playing you always hope you can stay in and around the game somehow and make a positive contribution in some way no matter how small. I have been incredibly fortunate to have received the opportunities that I have in the past and to have learned how things work from admin to playing and coaching.

“I’m really looking forward to this next chapter and all that it brings. The Proteas teams are a vital part of the cricket eco-system and there are areas that need our immediate attention, which I’m itching to get started on,” Mpitsang concluded.