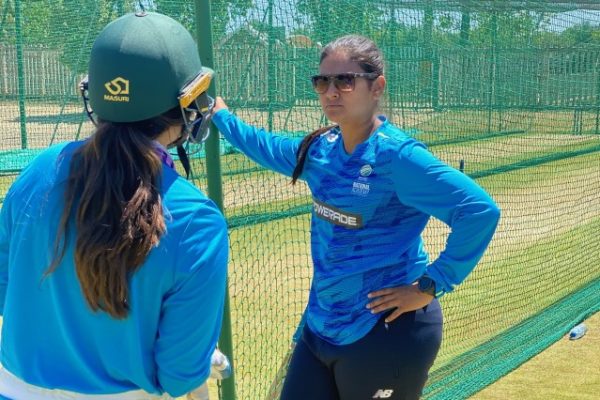 South Africa Under-19 and Women’s National Academy dual head coach Dinesha Devnarain has praised the players who have been participating in this week’s joint training camp that has been taking place in Potchefstroom.

The Cricket South Africa (CSA) national women’s camp began at JB Marks Oval on Monday and will conclude on Friday with physical conditioning being one of the main priority areas for the 21-player squad.

It is the third camp for the Momentum Proteas that has been held during the off-season, with this one also including high performance and national academy players, with the girls being put through their paces as they work their way back to full fitness and match sharpness following the lengthy layoff that was forced by the COVID-19 pandemic.

“I’m really grateful that the girls could all come out to this camp, especially with everything that has been going on around us these last few months,” Devnarain said. “I think it’s massive to have the Under-19 girls mixed with the senior players.

“There’s so much that they can learn both on the field and off it, just in terms of cricket etiquette and just the way we go about things. So I’m really happy in that sense.

“Having said that, there’s also a lot of work we need to do, but this is a good baseline to start from and we’ll take it from there.”

Not all the senior national players are in attendance, with several missing out due to their Women’s Big Bash League (WBBL) commitments. Those players are Dane van Niekerk, Shabnim Ismail, Marizanne Kapp, Laura Wolvaardt, Nadine de Klerk, Lizelle Lee, Mignon du Preez and Chloe Tryon. But there is still a strong presence of senior players.

Devnarain has been encouraging some of the younger members of the group to express themselves during the camp,

“The biggest thing for me is to just bring your authentic self to the fore,” she stated. “I just want to see true cricketers come out. In the world we live in now, a lot of people want to be a certain way because of what they see, but I just say be yourself.

“I just want them to come through and be themselves, show their flair, their brand of cricket and we’ll try and harness that in the best way we can because I think they play the best cricket when they’re most comfortable.”

The former Proteas all-rounder also praised the hard work being put in by the group.

She continued: “I’m happy with the way they’re progressing. You can see that the conditioning side of things has been a bit slow but that’s a consequence of COVID-19. But I must give credit to the girls for putting in the hard work.

“You can see that their bodies are sore and they’re bowling more than they should be. So I’m really happy with the way they’re carrying themselves and the work they’re giving me on the field.”

Devnarain, who was appointed as South Africa’s first black female coach in her dual role back in April, has also spoke about her relationship with national Head Coach Hilton Moreeng and his assistant Dillon du Preez.

“I must commend the coaches, they’ve been brilliant,” she adds. “We sit together at dinners and have chats here and there. I think it’s just massive to have that influence, you’re working with the young players, you have the Momentum Proteas and there’s no bridge in between. It’s like we’re all one family and how we take it forward, that’s the most important thing. So the coaches have been great and have given me a lot of leeway, so credit to them.”

The camp in the North West concludes at the end of this week.