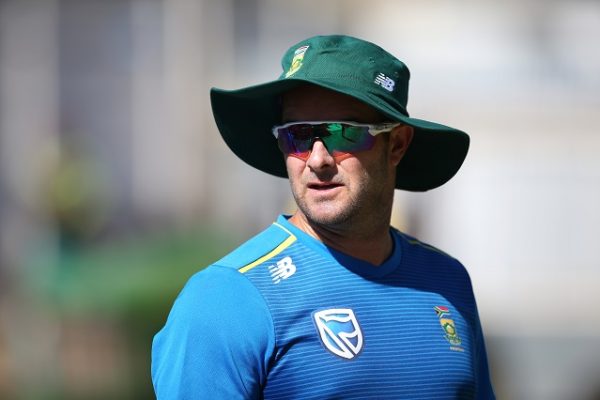 Proteas men’s Head Coach, Mark Boucher has emphasised the importance of his young team forging ahead with their new vision when they return to play in what he hopes will be the near future.

Cricket South Africa (CSA) is currently working tirelessly to bring a return to play and finalize dates for both the domestic and international seasons after more than six months of no action due to the COVID-19 pandemic.

The 2019/20 campaign was prematurely ended in March when the virus forced Boucher and his charges to cut short their limited overs tour to India, whilst local cricket also ended abruptly a few days later.

Everyone has mainly been anxiously tied down at home eversince, but the Proteas did manage to hold a long-time planned culture camp at Skukuza in Mpumalanga in the middle of August.

“It’s been interesting times for everyone,” the national coach said. “We were always meant to have a bit of a break… but no one thought in their wildest dreams that it would be this long, so to have all the guys in one place at the same time was really nice, just to catch up.”

The former Proteas wicketkeeper said that the camp was key for him and Assistant Coach, Enoch Nkwe to have the players lead with laying the foundations for a new identity for their young squad of players.

“It was important for this team to create a new identity. It (just) happened a little bit later than expected,” Boucher continued. “It was good to have a deeper squad as well, I haven’t really been given the opportunity to meet a lot of them personally so it was really nice to catch up with them – see a couple of new faces and see a couple of old faces, spend a bit of time together and get into the nitty-gritties about where we want to go as a team.”

Boucher says he and Nkwe feel the next generation of Proteas have the capability to grow and mature quickly.

He continued: “The one thing about the way myself and Enoch want to try and drive this team is to have players take ownership and responsibility for their team. We had really good mediators who came in. It wasn’t about the management; it was really about the players getting a couple of things off their chests and being open and honest. There were some really difficult topics at times, but for me it showed that we as a team might be young, but we are growing quickly.”

The Proteas Test squad has lost a significant number of experienced players in the recent past, with the likes of Hashim Amla, Vernon Philander, Morne Morkel, JP Duminy and Dale Steyn all retiring. They have dropped to sixth in the MRF Tyres ICC Test Rankings and are ranked fifth in the two white-ball formats.

Boucher says he wants to see an improvement in their global standing.

“It’s all about performance and that’s key for me,” he explained. “We don’t want to be a nice group of guys and be eighth in the world. I’d rather be a challenging group of guys and be competing for the number one spot and they all want that as well which is great to hear. We’re all aligned in the right direction, and although it’s all still words, we still need to go out there and try and live it, rather than have it be words coming out of our mouths. I’m happy that the players are happy, but now the hard work starts.

“We want to get on the field and start playing. It’s been a long break, I don’t think the players have had this long a break since school days. Although they’ve been practicing, you (as a coach) want to put that practice into match experience. A few guys have moved over to the IPL, so they’ll be happy that they’ll get some game time.”

With the country dropping down to lockdown Level One from this week, a return to cricket within the boundaries of South Africa appears to be in sight.

Boucher added: “My biggest hope for the national team when we do get back to playing again is that we really drive the vision that they’ve (the players) put out for themselves.

I do believe that we’ve got the talent to do that and if we play in that sort of way, I have no doubt that there’s going to be success.

“We’re going to make some mistakes – we’re a young team – but as long as we keep learning from those mistakes, we will become a better unit. The players are keen to try something different in order to get different results, especially when we go to big tournaments.”

A topical conversation in many cricket circles in South Africa has been about the appointment of a new Test captain. Boucher has said that while he has had discussions with the relevant people at CSA and in the team structure about possibilities, they ultimately need to wait for the appointment of the Convenor of Selectors to assist in the process.

“We’ve had a lot of conversations and a lot of time to think about what we want to do. Unfortunately, at this stage, we need a convenor (of selectors) to come in as well and hopefully the convenor will be elected soon. It’s a discussion that will be had and probably debated amongst a few people. We’ve addressed it in small-talk and we’ve been given the opportunity to have a lot of time to think about the decision.

“We’ll look to select someone else for the Test role. One of the things that we’ve learned from a side like England is a guy like Eoine Morgan comes in and he’s got a lot of time to plan because he’s not involved in the Test team. So, when he goes away from white ball cricket, he’s got an opportunity to sit down and plan, so when they sit down as a white ball team again, there’s a very clear direction of where they want to go. Sometimes when a player and especially the captain is involved in all three formats, it can be an automatic swap from format to the other because there’s not a lot of time in between. So that’s the positive, you get a captain who can sit down and really plan what he wants and he can try drive that vision to the players and it gives you some freshness when there’s a short turnaround time between the formats.

“I think Quinny’s (Quinton de Kock) workload is pretty high,” he continued. “He showed good results in the T20s and the One-Dayers that he’s taken over. The last conversation I had with Quinny around this topic was in India where he felt that the workload was going to be a little high for him. Whoever is the captain will probably use Quinny’s brain to good effect as a keeper, you see things from probably the best angle. I’m sure he’ll add a lot of value just being Quinton de Kock within the Test team,” Boucher concluded.