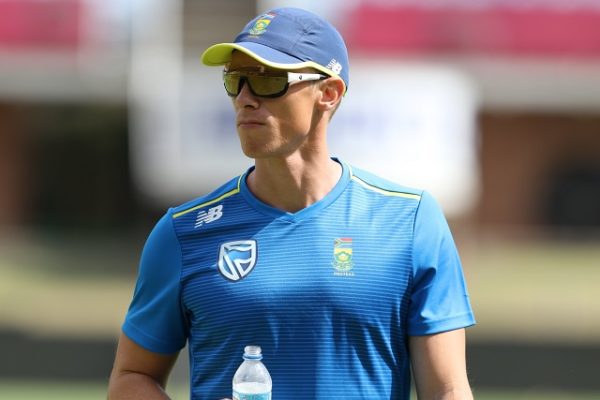 Proteas batsman, Rassie van der Dussen is looking forward to the return of international cricket where the team can once again assemble and continue working on the foundation that has been laid for the establishment of their new culture.

An extended 32-man, High Performance squad featuring Proteas contracted players, those who are regular features in the national team and the South Africa A team, as well as players who have been identified as in the plans for the near future, concluded the first national team culture camp in 10 years last week where they agreed on a new way forward, with an updated values system that held Respect, Empathy and Belonging as their prevailing top pillars.

“The overall feeling was very positive,” Van der Dussen commented this week. “Having had a few months off and time to reflect after our last few series against England and Australia it was good to come together with everyone on a clean slate and it was good to discuss a new way forward and to really go in-depth into some topics that were sorely needed at this time.

“Performance was discussed at length. I’m very excited and enthusiastic about what’s lying ahead for us as a Proteas team. We found a commonality that’s really quite inspiring and I can’t wait to get going and to apply it and to start living it and start working out game plans around it and transforming the way that the Proteas will play and be seen going forward.

“There were some very difficult topics discussed at the camp,” he continued. “The credit must go to CSA and the coaching and management staff for creating that platform and environment for everyone to feel safe and to be able to tell the stories and bring to light the issues that were in everyone’s hearts.

“I was pleased with the willingness of the squad to have open conversations, it’s very important for people to firstly, understand each other – there are different backgrounds, different cultures, different races and religions – in a country as diverse as ours.

“It’s important to open your mind and have a broad view of everything that’s important to everyone before you make a stand in terms of where you place those characters. It was great to see that everyone felt comfortable and that we had a platform where everyone could be honest with one another without being judged.”

One of the main topics of discussion was transformation and the different lived experiences of players from different backgrounds. The objective was to create an environment where understanding and empathy would prevail as a result of teammates getting a window into one another’s experiences.

“It’s extremely important to have discussions around race, the country’s history and transformation. In South Africa, you cannot afford to be oblivious to the past and in my opinion, it almost borders on ignorance if you don’t go to the effort to research the history of our country – the good and the bad,” the 31-year-old explained. “When we get to a place where everyone can make an informed comment and is educated in these aspects, people can then come to a place where there’ll be a lot more empathy, more understanding and the way forward will be a lot clearer.”

Van der Dussen gave a break-down of the values system’s three pillars as well as the reasons why the team decided upon them. He said:

“Respect, empathy and belonging are the pillars of the values system that’s been put in place. Respect for your team, for yourself, for your environment, for the people you get in contact with, the people who look after you, the people who support you, our supporters, the man on the street and basically living the Proteas way in your day-to-day life, in everything that you do. Upholding that standard as an ambassador of your country and an ambassador of the Proteas badge.

“Empathy, is understanding. Like I mentioned earlier, it’s very important for everyone to understand our country, understand what’s happening in our country at the moment, understand the past and everything that transpired. Understand different cultures, religions, races and understanding different stories from different people and players and realizing that it doesn’t matter which race you are, which culture or religion you are, your story might still be different to someone else’s and the reason you believe in somethings and live your life a certain way. We are all products of our environments growing up, and it’s really important to understand and respect each other’s stories.

Faf du Plessis was unable to join the team due to the birth of his second daughter, Zoey.