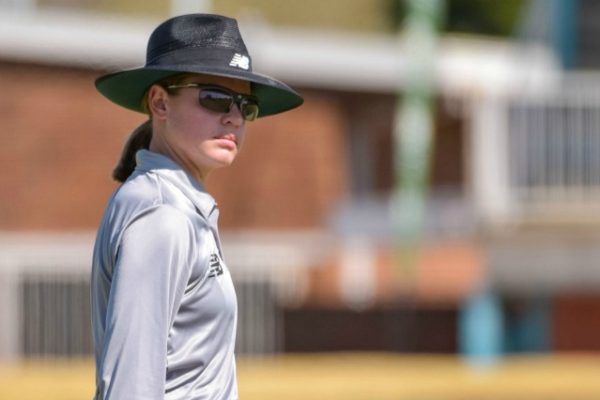 On 1 February 2019, at the age of 22, Lauren Agenbag made her way out the middle of Newlands Cricket Stadium in Cape Town to officiate the first T20 International between the Momentum Proteas Women and Sri Lanka.

With that, Agenbag became the first-ever South African woman to stand in a T20 International.

“I was quite nervous,” recalls Agenbag. “I remember just before the game, with 15 minutes to go, the nerves hit me.”

“I tried to approach it like any other game and made sure I was well prepared. Despite the nerves, I thoroughly enjoyed it.”

An area of the game traditionally dominated by men, Agenbag has undoubtedly become a flag bearer for female umpires in South Africa.

This Women’s Month, CSA is celebrating the progress of women empowerment and gender equality both on and off the field, under the theme: “Enabling equality for women in the world of Cricket South Africa.”

It was just four years earlier that Agenbag chose the path less travelled by women.

“I used to play cricket from a very early age and I lost interest. I started looking at other avenues of the game that I could pursue and umpiring came up and I thought ‘right, let’s give it a go’.”

And since turning her focus towards umpiring, she has garnered a vast amount of experience in a short space of time.

Hailing from Centurion in Pretoria, Agenbag plied her trade at Northerns Cricket Union, where she progressed through the system by officiating club games and national tournaments, before later being included in the Cricket South Africa (CSA) Reserve List Panel.

She went on to became the first female to officiate a first-class game between the Central Gauteng Lions and Boland in the CSA 3-Day Provincial Cup during October last year.

Her performances on South African soil earned her elevation to the ICC’s all-female panel at the Women’s T20 World Cup 2020 Qualifier Final and play-offs. She proved up to the tasked and was awarded a spot on the T20 Women’s World Cup 2020 officials panel.

Agenbag stood in three group stage matches, including a thrilling encounter between hosts Australia and New Zealand at the Junction Oval, in Melbourne. The winner of the match would go on to face South Africa in the semi-final at the Sydney Cricket Ground.

“It was a great experience!” says Agenbag. “Officiating the World Cup is definitely one of my career-highlights to date.”

“I got to experience the DRS system for the first time and that was something to get used, especially having decisions reviewed.”

“I learnt a lot during that tournament and I am hoping to apply those lessons to my umpiring when we return to play.”

With national Women’s Month in mind, the now 23-year-old is impressed by the strides made in strengthening the number of female umpires across the world.

“I am very hopeful that in a couple of years we’ll have a lot of female umpires, especially if you look at the T20 World Cup, just the growth that was shown there and to be part of that experience is really exciting for aspiring umpires.”

“The key is exposure. The more females see that they can make a career out of umpiring, the more interest it will spark,” Agenbag concludes.