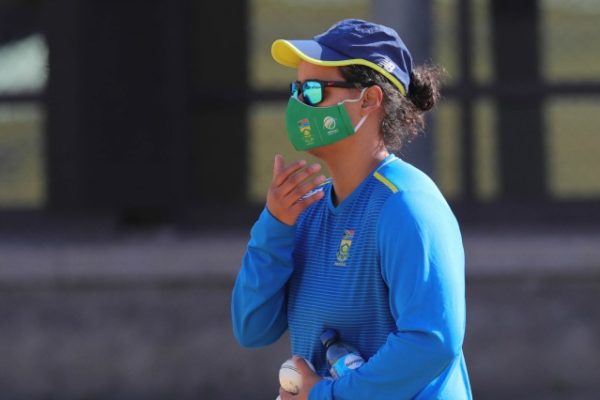 The number 143. This is the exact count of days since the Momentum Proteas last set foot on a cricket field.

“The wait has been very difficult,” said vice-captain Chloe Tryon after reuniting with her teammates this week for a skills-based training camp at the Powerade High-Performance Centre (HPC) in Pretoria.

Of course, this was no typical reunion for the players.

“You’d obviously want to go and hug your mate but that can’t happen now.”

With the coronavirus pandemic dictating return to train and play conditions, the National High-Performance squad spent the week training and living on-site at the HPC in a bio-secure environment.

“The new norm during training is pretty tough, everyone’s kind of scattered,” said Tryon. “All the girls are very aware of what needs to happen and everyone’s been really good this week with regards to keeping distance and making sure that we’re sanitising everything.”

Having gone for more than four months without picking up her bat, the all-rounder simply enjoyed the feeling of bat on ball.

“I was just getting back to basics with all aspects of the game,” Tryon explained. “It’s been a while since I batted, bowled and fielded, so it was nice to start with the basics and keep it pretty simple. I didn’t want to jump right ahead.”

It was also the first time that the players linked up with head coach Hilton Moreeng since his reappointment. With the assistant coach position yet to be filled, Moreeng acquired the services of former VKB Knights all-rounder, Dillion du Preez, as a bowling consultant for the duration of the camp.

“He helped with the technical work and worked closely with the seamers,” expressed Moreeng. “It was good to have him here because of the knowledge and experience that he has.

“What also helped was his past experience in women’s cricket. We’re very happy with the work that he’s done for us this week.”

The camp is one of two that form part of the Proteas’ preparations for the proposed tour of England, expected to take place next month.

South Africa will recall a memorable last outing against their potential hosts, after recording their first-ever win against England in a major ICC tournament in the opening match of T20 Cricket World Cup 2020 before going on to suffer a semi-final defeat to eventual winners and hosts Australia.

“It would definitely mean a lot if we could step out and play some cricket after four months. It’s been a long wait,” continued Tryon.

“The girls were definitely on a high after the World Cup despite the result. To be able to step out now with regards to what’s happening around the world, would mean a lot to us. Hopefully it gets women’s cricket going again but also making sure that we’re going about it the right way, just staying safe.”

One thing’s for certain, the 26-year-old is set to return to Australia after re-signing with the Hobart Hurricanes. The sixth season of the women’s premier T20 tournament is scheduled to take place between 17 October and 29 November.

“The decision for me to sign with the Hobart Hurricanes was definitely a no-brainer,” she stated. “I had a really good season there (2019). I learnt a lot about my game, met new people; just the culture was fantastic there. I thoroughly enjoyed myself. I’m really excited to be going back there.”

For now, Tryon and the rest of the squad members will return to their respective provinces for one-on-one training over the course of the next two weeks before regrouping for the second camp on 16 August as the players build-up towards match fitness.

“With every day now we’re just slowly building-up towards the possible tour and making sure that we’re ticking the boxes,” concluded Moreeng. “Yes there is a lot of work ahead, and the players understand that it will continue as soon as they go back to their provinces.”