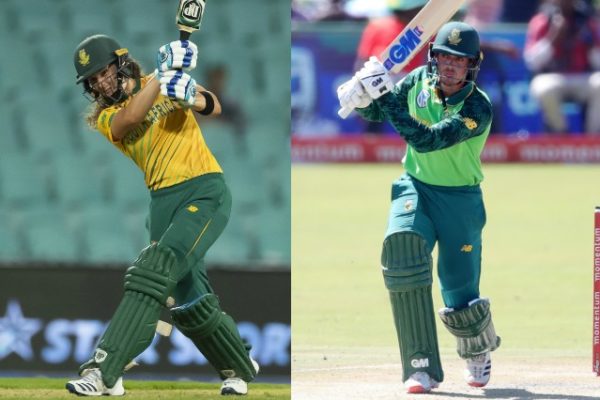 Quinton de Kock and Laura Wolvaardt received the highest accolade that Cricket South Africa (CSA) has to offer when they were named SA Men’s and SA Women’s Cricketer of the Year in their respective categories at CSA’s virtual awards ceremony which was held on Saturday evening.

The traditional gala ceremony was not possible because of the Corona Virus lockdown but it did not stop the CSA family celebrating the occasion in a suitable manner.

It was a truly memorable occasion for both Quinny and Laura as they were honoured in three different categories. De Kock was also named Standard Bank Test Cricketer of the Year and was honoured by his peers as SA Men’s Players’ Player of the Year.

Wolvaardt was also named Momentum Proteas ODI Cricketer of the Year and was voted SA Women’s Players’ Player of the Year.

Wolvaardt becomes the youngest winner of South Africa’s top women’s award at the age of 21 years and two months with Sune Luus being just two months older when she won the award in 2017.

In an important first for gender equality two of the awards – the SA Fans’ Cricketer of the Year which was decided by an online poll and the KFC Streetwise Award – were contested by both the Proteas men and Momentum Proteas women’s players. The former award went to David Miller in a tight contest which was only decided in the final week and the latter was won by Mignon du Preez for her brilliant six hit that virtually clinched South Africa’s victory over England at this year’s ICC Women’s T20 World Cup.

It played a critical role in getting the Proteas through to the semi-finals and was also South Africa’s first ever victory over England in a major ICC women’s tournament.

The other top award in the women’s category went to Shabnim Ismail who was again named Momentum Proteas T20 International Player of the Year while the theme of youthful winners continued with 19-year-old Nonkululeku Mlaba being named International Women’s Newcomer of the Year.

“Quinny and Laura have set the highest standards that we expect from our icon Proteas players,” commented CSA Acting Chief Executive, Dr. Jacques Faul. “Quinny is the leading wicketkeeper/batsman in Test cricket and is, in fact, one of the leading batsmen in both red ball and white ball cricket. He is also starting to emerge as an outstanding leader as witnessed by the Proteas clean sweep of Australia in their recent ODI series.

“Laura was named in the tournament select XI at the conclusion of the ICC Women’s World T20 which tells us a great deal about the esteem in which she is held at international level. At the age of 21 her best years are ahead of her and she will be a key player when the Momentum Proteas go to the ICC Women’s World Cup next year.

“It is good to see the number of young players starting to dominate at international level as we move into a new era following the retirement of some of the game’s legends. Anrich Nortje and Lungi Ngidi have ensured that our fast bowling stocks remain among the best in the world.

“It is an important sign of the changing face of cricket that for the first time our best men’s and women’s players competed on a level playing field for some of the awards and Mignon du Preez’s achievement in being named winner of the KFC Streetwise Award is a very significant one. She has been a wonderful servant of the game for a long period of time and her performance in reaching the milestone of 100 T20 International caps deserves special mention.

“Our domestic cricket remains blessed with great talents and congratulations to all the winners in those categories as well.

“I warmly congratulate all our winners, both at international and domestic level, and I also wish to take this opportunity to acknowledge our umpires, grounds staff and scorers, too.”

The other winners were Wandile Gwavu of the Imperial Lions (Pitchvision Coach of the season) and Wandile Makwetu of the VKB Knights (Domestic Newcomer of the season).

The CSA Fair Play award went to the Warriors and the CSA Scorers of the Year award to the Central Gauteng Lions.