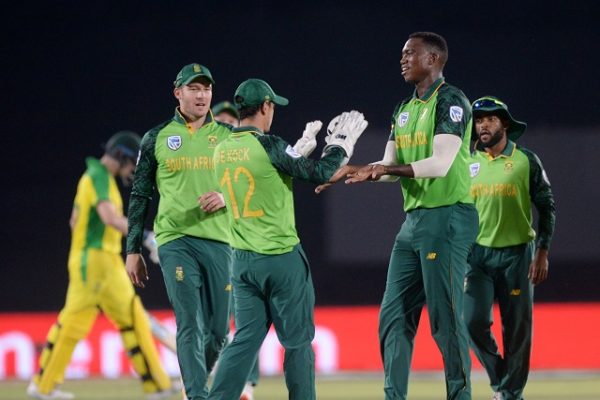 Momentum Proteas all-rounder Marizanne Kapp and batsman Laura Wolvaardt have both won nominations in four categories in the women’s section.

The gala event to honour South Africa’s top performing professional cricketers over the past year will take place on Saturday, July 4 2020, in a virtual ceremony because of the restrictions imposed by the Corona virus.

Either one of them could also be a contender for SA Fans’ Cricketer of the Year.

Nortje in his first year of international cricket has also been nominated in the SA Men’s Cricketer of the Year and RAM Delivery of the Year category.

Mignon du Preez joins Wolvaardt in being nominated for the KFC Streetwise award.

The function will feature a notable first with South Africa’s best men’s and women’s cricketers for the first time going head to head in two categories: KFC Streetwise Award and the RAM Delivery of the Year.

“It is my great pleasure and privilege to congratulate all the nominees as we celebrate the achievements of both our Proteas men’s and women’s squads,” commented CSA Acting Chief Executive Dr. Jacques Faul.

“And, while we are doing that, let us not forget to thank all those great and selfless people who work diligently behind the scenes to create opportunities for our leading cricketers to excel.

“Our country continues to produce world-class players. Quinton de Kock, Kagiso Rabada, Faf du Plessis and Imran Tahir all rank among the top men’s players in the world across the various formats and I think we have all been excited to see new faces such as Anrich Nortje and Janneman Malan who have emerged in the past year.”

“As always, these awards are tough to judge due to the stiff nature of the competition,” commented Fredericks. “Our world-class senior players are well established and there is an encouraging number of international newcomers making their mark as well.

“The judging panel was impressed by the overall performances during the season of the nominees in the various categories,” Fredericks added.

Loyal Proteas fans can also have their say in the awards. The SA Fans Cricketer of the Year requires fans to vote for this award. Further details of how the voting mechanism works can be found on CSA’s Social Media platforms.

PITCHVISION PROVINCIAL COACH OF THE YEAR

DOMESTIC NEWCOMER OF THE SEASON

PITCHVISION COACH OF THE SEASON

RAM DELIVERY OF THE YEAR

SA FANS CRICKETER OF THE YEAR

MOMENTUM PROTEAS CRICKETER OF THE YEAR

SA MEN’S CRICKETER OF THE YEAR