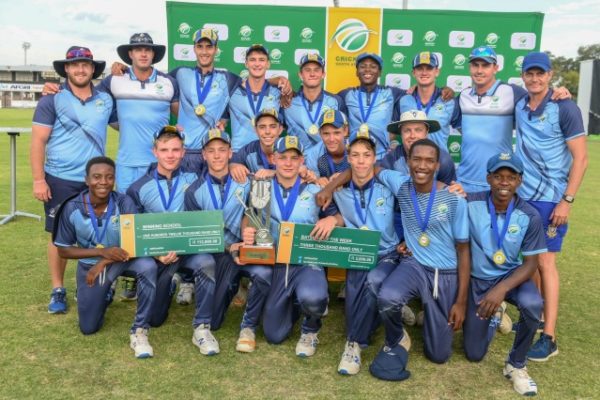 Hardus Coetzer and Richard Ackermann were the stars of the show as the Momentum Multiply Titans representatives, who suffered their first loss of the week when they went down to Kearsney College earlier in the day, edged out World Sports Betting Cape Cobras counterparts South African College High School or SACS by 15 runs in the final.

Defeat for their opponents was the first of the week, but came in the crunch game as they narrowly missed out on the title. They were put under pressure from the get-go in the final as Waterkloof amassed a massive 186 for six after winning the toss and batting. SW Kemp lead the way for the hosts with 45 off 25 balls, before all-rounder Coetzer really went crazy with a thumping unbeaten 77 off 54 balls, with a rollicking finish of 28 off 12 balls provided by Ackermann.

Oscar Welsh, the outstanding bowler of the weekend, was the pick of the bunch with the ball with three for 24. Daniel Smith (50 off 34 balls) and Kai Curran (46 off 36 balls) then provided SACS with the strong start they needed as they got to 97 for one. But Ackermann picked four for 17 and Coetzer two for 26 to knock the heart out of the Cape sides’ batting as they ended up limping to 171 for nine handing Waterkloof the title.

Kearsney were one of the four morning winners, signing off from the premier school’s competition with victory to end Pool B second. The Hollywoodbets Dolphins representatives claimed that stunning win over Waterkloof thanks to Cade Carmichael’s sensational 37 off only 14 balls, which included two sixes and three fours, as well as an excellent Matthew McMurray-lead bowling display.

Batting first after winning the toss, the KwaZulu-Natal side totalled 150 for eight, before Joshua Stocks (2/12) and Rubin Rheeder (2/23) ripped through the opposition top order to leave the locals in trouble.

McMurray then claimed three for 16 to close out a comfortable 38-run win – Waterkloof restricted to just 112 for nine for a shock win. SACS, who ended top ahead of the KZN school, beat St Andrews School (VKB Knights) after two wickets each from Matthew Klusenser (2/18), Welsh (2/18) and Michael Levitt (2/12) as well as 38 by Smith helped them to a four-wicket win.

The Johannesburg-based school finished second in Pool A. Finally, Nhlanhla Ntleko (39) and Noncanda Sivuyile (2/16) played big roles as Queens High School (Inland Focus) beat Grey High School (Warriors) by two runs in one of the closest matches of the week.

Full scorecards from the CSA Schools T20 Challenge are available at www.websports.co.za.