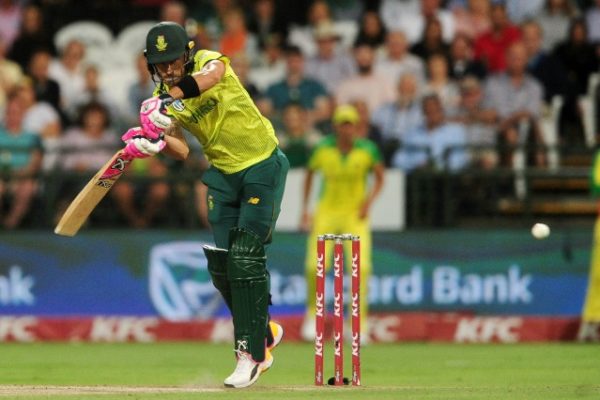 Australia made light work of the Standard Bank Proteas to claim a thumping 97-run victory in the final KFC T20 International match at Newlands on Wednesday evening. They thus claimed the series by a 2-1 margin and head to the first of three Momentum One-Day Internationals at Eurolux Boland Park on Saturday in a confident mood.

In a match that was eerily similar to their one-sided victory in the first match at the Imperial Wanderers Stadium Australia powered their way to 193/5 on the back of an opening stand of 120 in 11.3 overs between David Warner (57 off 37 balls, 5 fours and 2 sixes) and Aaron Finch (55 off 37 balls, 6 fours and a six).

It was Australia’s highest opening stand against the Proteas and also a new ground record for Newlands.

From that platform Australia were almost bound to get close to the 200 mark and this they did in spite of some improved bowling at the death in which Lungi Ngidi stood out with his 1/12 from his last two overs.

Kagiso Rabada also had a good last over, taking 1/8, but it should have been better as he bowled Steve Smith with a delivery that was later ruled a no ball on referral.

The Proteas again lost Quinton de Kock, who had earlier gone past the 50 mark in dismissals behind the stumps, cheaply to Mitchell Starc and there was very little batting after that as the Proteas struggled to get past the lowest total of 89 they had made at the Wanderers.

For the second time in the series Ashton Agar had the chance of a hat trick but this time the No. 11, Tabraiz Shamsi, somehow managed to survive.

But the Proteas total of 96 in 15.3 overs was nevertheless their second lowest ever.

Starc was named KFC Man of the Match for his figures of 3/22 off 15 balls. By getting rid of De Kock and Faf du Plessis up front he delivered blows from which the Proteas never recovered.

Australian captain Aaron Finch who made major runs in both Australia’s winning performances was named KFC Man of the Series.