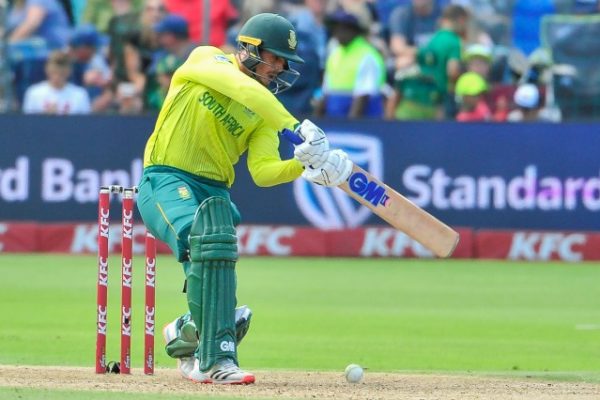 Quinton de Kock led his Standard Bank Proteas from the front and his quicks got their death bowling act together as they beat Australia by 12 runs in the second KFC T20 International match at St. George’s Park, Port Elizabeth, on Sunday.

The two sides now go to Newlands on Wednesday for the series decider with the teams locked at 1-1.

What was equally important was that the Proteas restored their reputation and pride as a major international player after their no show at the Imperial Wanderers Stadium on Friday evening.

What is crystal clear is that the pressures of captaincy are having no impact on De Kock’s own performance. He won the toss and, when he and Reeza Hendricks went out to open the batting, he was under huge pressure after what had happened in the previous game.

His response was dynamic as he took the fight to all the Australian seamers, forcing the visitors to change their game plan and employ spinner Adam Zampa in the power play. He was largely responsible for the Proteas scoring an impressive 59/0 in the power play.

He went on to finish with 70 off 47 balls (5 fours and 4 sixes). It was his first half-century against Australia in the format and his sixth overall. It earned him the KFC Man of the Match award.

The Proteas final total of 158/4 to which Rassie van der Dussen, back in his normal middle-order position, also contributed significantly (37 off 26 balls, 2 fours and 2 sixes), looked as though it might be a bit light after they only scored 36 in the last 5 overs.

When it came to Australia’s turn to bat they were also brilliantly served up front by David Warner who batted defiantly to the end (67 not out off 56 balls, 5 fours and a six) and who gave an outstanding display of what could be achieved by sharp running between the wickets.

Australia were well placed at 127/2 midway through the 16th over but then Lungi Ngidi took wickets in successive overs and Kagiso Rabada and Anrich Nortje chimed in with a wicket apiece in their final overs.

As a result the heavily criticised Proteas seamers took 4/30 between them in the final 5 overs to play a match-winning role of their own.

The Proteas fielding was also back to its best levels with Faf du Plessis taking an incredible catch and then doing an equally brilliant double play catch with David Miller on the boundary.