Centurion Du Preez gets Proteas over the line to famous victory 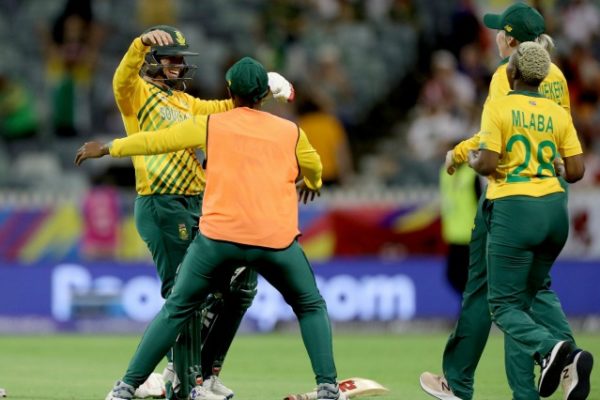 Mignon du Preez celebrated her 100th appearance in the T20 format in the most memorable fashion imaginable when she hit a 6 and a 4 in the final over to get the Momentum Proteas home to a six-wicket victory over England with two balls to spare in their opening match at the ICC Women’s T20 World Cup at the WACA in Perth on Sunday.

It was one of their most famous victories ever and their first over England in a major ICC event.

The Proteas had gone into a testing final over, needing 9 runs off six balls from the experienced Katherine Brunt. She had a new partner in Sune Luus and after a couple of singles the veteran took charge to hit the two boundaries that got them over the line.

“This is a special day for our cricket,” commented Proteas captain Dane van Niekerk who was named Player of the Match for her contribution with bat and ball and her inspiring leadership. “Mignon is one of the most respected women’s cricketers in South Africa.”

It was a victory based on experience with the senior players taking the lead in getting the team home. It started when Shabnim Ismail took a brilliant running catch in the deep to get rid of England captain Heather Knight.

Van Niekerk (46 off 51 balls, 2 fours and 2 sixes) and Kapp (38 off 33 balls, 6 fours) then laid the foundation for the successful chase with their second-wicket partnership of 84 in 13 overs before first Chloe Tryon with a six and then Du Preez applied the finishing touches.

The result gets the Proteas campaign off to an excellent start as they are in a tight group in which only two of the five teams qualify for the semi-final.

Their next outing is against the group outsiders, Thailand, on Friday and they then finish their group with matches against the Windies and Pakistan.