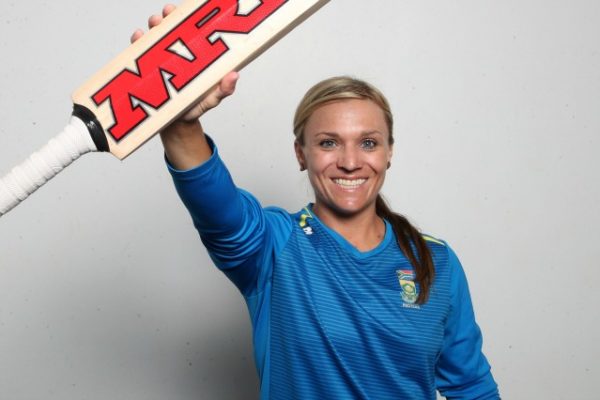 After more than a decade at the top of the order, Mignon du Preez is set to become the first South African woman to play 100 T20 Internationals when the Momentum Proteas Women take to the field against England in the ICC Women’s T20 World Cup on Sunday.

“Growing up I always wanted to represent my country and to reach the milestone at the World Cup is pretty special. It really is a dream come true,” commented du Preez.

Second to skipper Dané van Niekerk on South Africa’s T20I runs chart, the right-hander has so far amassed 1 666 runs, including seven fifties and a strike-rate in excess of 100.

Her reliability with the bat earned her stints in Australia’s Women’s Big Bash League and England’s Kia Super League.

Not only has the 30 year-old made a name for herself out in the middle, but as a former captain, du Preez enjoyed success, notably when she led the Proteas to their first-ever T20 World Cup semi-final in 2014.

“We had a final group game against New Zealand,” recalled du Preez.

“They had their bags packed the night before as if they were going to the semis. Our girls saw that and thought ‘no that’s not going to happen – we’re going to make sure those bags are packed for a different reason’

“And that’s exactly what we did. I played one of the better knocks of my career and was named player of the match.”

“Then comes the lowlight. Playing in the semi-final. It was the first time we played on the big stage. The match was televised and the moment got the better of us.”

Du Preez now finds herself playing in her seventh T20 World Cup and strongly believes South Africa have every chance of booking their place in the final on 8 March at the MCG in Melbourne.

“I definitely think this is the year! It just feels different. There’s an excitement around the group that this is the year we take it one step further and bring the trophy back home.”

Since arriving in Australia a little over a week ago, South Africa have warmed-up with two friendlies which resulted in a win against Sri Lanka and a narrow loss against the hosts.

Despite having a run of mixed fortunes in recent outings, including a 3-1 series defeat at the hands of New Zealand, du Preez feels the talent is as good as it has ever been leading into their Pool B group matches against England, Thailand, Pakistan and the West Indies respectively

“This is the first time we have a full-strength squad at a World Cup event. We have come better prepared; with the amount of games we have played as well as the number of players who have competed in these conditions,” noted du Preez.

“The gap has closed in international cricket, especially in the T20 format. We saw in the warm-up games how Sri Lanka thrashed England. Anything can happen on the day.”

“For us, it’s about focusing on our processes and that’s something we can control because we’re not sure what the opposition will dish up on the day. We haven’t played Thailand before, so we don’t know what to expect but we just know you can’t take any team lightly”

As for her own game, she knows exactly what to expect. Once a quick hitter between the wickets, du Preez’ game has evolved – packing the power to score more freely. By her own admission, her adaptive approach is coming of age.

“Once you realize as a batter that you’re going have more bad days than good, you just need to enjoy those good ones when it’s your day. Turning 30 has helped me grow a lot more. Retirement is inevitable, so I just want to make sure that during these next few years, I have fun,” concluded du Preez.