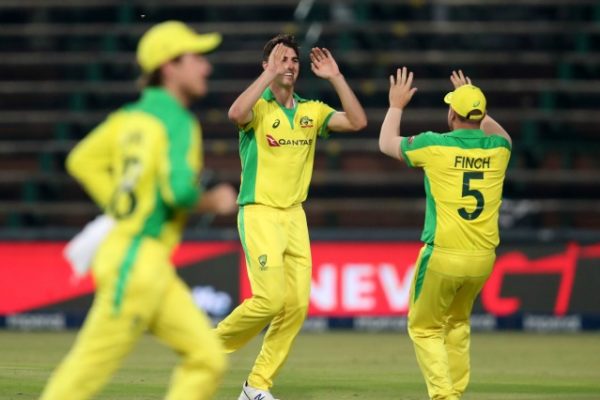 AUSTRALIA totally outclassed the Standard Bank Proteas in all three disciplines to overwhelm their opponents by 107 runs in the opening KFC T20 International match at the Imperial Wanderers Stadium on Friday evening.

It was Australia’s biggest ever winning margin over the Proteas while the home side’s total of 89 was their lowest ever in this format, the previous lowest being 98 against Sri Lanka.

The Australians, after losing the toss, took charge of the match from the start, overcoming the early loss of David Warner during a second-wicket stand of 80 off 48 balls between Aaron Finch and Steve Smith as they scored 70 runs in the power play overs.

The Australians found runs far too easy to come by against some inaccurate bowling and the key difference between the two sides became evident when it came to South Africa’s turn to bat.

The visitors bowled with far greater accuracy and intensity with the result that the Proteas had to indulge in high risk shots at time to get their runs. The result was that they were a shaky 38/3 at the end of the power play.

Thereafter, it was left to the spin of KFC Man of the Match Ashton Agar to clean up the South African innings. In the process he claimed the 13th hat trick in the history of T20 International cricket and the second by an Australian after Brett Lee, who took the first hat trick in the augural T20 World Cup against Bangladesh at Newlands in 2007.

For good measure he almost claimed a second hat trick and finished with the remarkable figures of 5/24 which are the joint best for a T20I at the Wanderers. He was only the second Australian to claim a fifer and the best against South Africa with no Australian ever having taken more than 3 wickets against the Proteas before.

The Proteas bowled better at the death than they had done in previous matches although Kagiso Rabada never managed to find his rhythm and was expensive.

There were also 12 wides bowled by South Africa.

Pite van Biljon made his debut for the Proteas, becoming the 86th player to represent South Africa in this format.