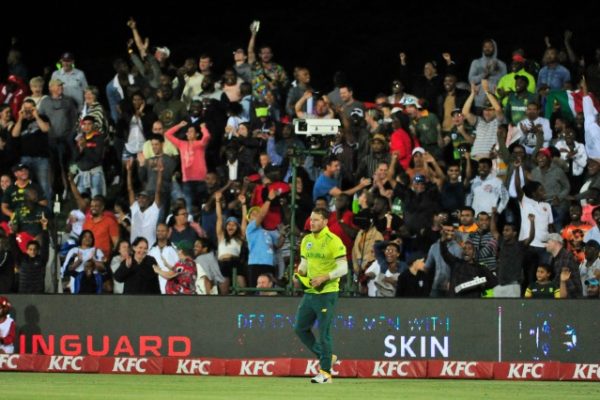 Cricket South Africa (CSA) today thanked the South African public for filling stadiums to capacity in the last four matches in the international series against England, and for the manner in which they have rallied behind the Standard Bank Proteas in the best traditions of sportsmanship which produced three outstanding and thrilling contests in the KFC T20 International matches.

“Everybody is agreed that this has been one of the best T20 series ever played and this is due both to the excellence of the players of both sides on the field and the support of our fans in the stands and on the grass banks as well as those who have followed the action on television and radio,” commented CSA Acting Chief Executive Dr. Jacques Faul.

“I must say the quality of the catching of the multitude of sixes by our fans has been excellent and they have truly been in the game.

“Our fans are very important stakeholders in South African cricket and to put it into context they have been an admirable 12th man for our side!

“They have also been generous in their applause of our opponents with many of them having become household names here through their involvement in our Mzansi Super League (MSL).

“We now turn our attention to the final highlight of our home international summer when we take on Australia in a KFC T20 International series followed by the Momentum One-Day International Series.

“South African fans are renowned for the warmth of their hospitality and I request that we again show our visitors a warm South African welcome at these matches and the respect they deserve.

“Contests between our two countries have always been gripping affairs of the highest quality and the best way we can all support our team is to get behind them in a true sporting spirit,” concluded Dr. Faul.