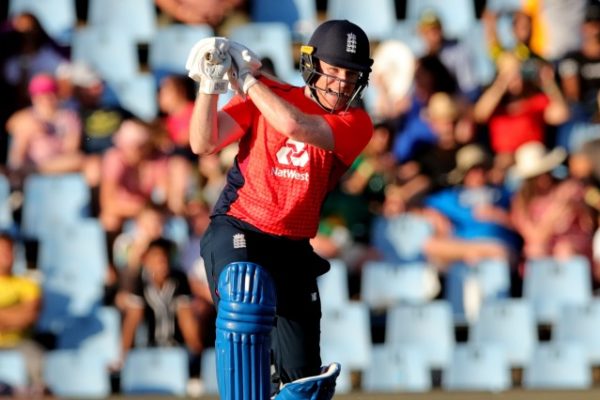 EOIN MORGAN launched a six-hitting blitz to get his England side over the line by five wickets with five balls to spare over the Standard Bank Proteas at SuperSport Park on Sunday. The result gave them a 2-1 KFC T20 International series win to go with their victory in the Test series and the drawn Momentum One-Day series.

The England captain also finished the T20 series as the leading runs scorer on either side with the Proteas opening pair of Quinton de Kock and Temba Bavuma being the next best.

It was a fitting end to what has been a high-quality series with a total of 26 sixes being hit by the two sides while almost 450 runs were put on the scoreboard.

KFC Man of the match and Man of the Series Morgan’s contribution was 7 sixes in a half-century that took only 21 balls and it was his partnership of 61 off 27 balls with Ben Stokes that really settled the issue as they chased down a target that had soared to more than 12 runs to the over.

It was England’s second highest successful runs chase against the Proteas, only being bettered by the 230 they had to make at Mumbai four years ago.

In spite of the disappointment of the series defeat the Proteas can take some important positives out of the series, the most important being the settled and successful opening batting partnership between Quinton de Kock and Temba Bavuma. They had successive partnerships in this series of 48, 92 and then today’s effort of 84.

They have regularly enabled the Proteas to score more than 60 in the power play overs.

A second positive today was the innings of Heinrich Klaasen who smashed 66 off 33 balls (4 fours and 4 sixes) and gave the Proteas the impact in the middle order that they can build on going forward. It was his first white ball appearance for the Proteas in just over a year and he is clearly going to figure in the plans for the future building up to the T20 World Cup.