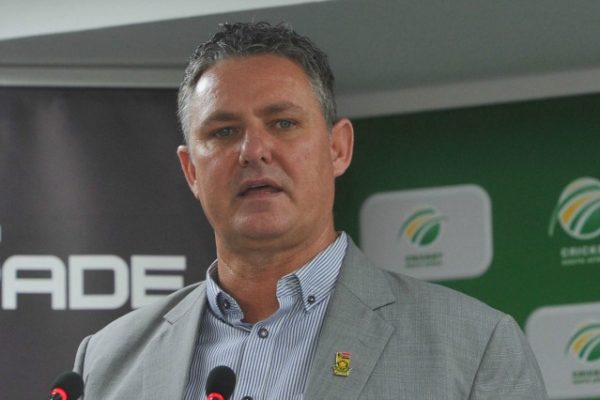 Cricket South Africa (CSA) added its voice and commitment to the fight against femicide and violence against women when it launched its Black Day campaign at the Hollywoodbets Kingsmead Stadium today.

The focus point of the campaign will be the ODI match between the Momentum Proteas and Australia to be played at Hollywoodbets Kingsmead on March 22.

“As Cricket South Africa we are painfully aware that our country is afflicted by rising numbers of femicide and violent crimes against women,” commented CSA Acting Chief Executive Dr. Jacques Faul.

“CSA wishes to support the fight against this injustice and to use its voice to draw attention to the prevention of gender-based violence by hosting a marquee match for women’s cricket, an event similar in nature to our Standard Bank Proteas Pink ODI and the Pink Sydney Test.

“CSA has termed the event Black Day in line with the colour of the national campaign against gender-based violence as supported by our Government.

“CSA calls on all to assist us in our endeavour to take a firm stand against this ill that threatens the well-being of our nation and to pledge support of CSA’s Black Day Initiative.

“It is highly appropriate that the match should take place in the month when we celebrate International Women’s Day which coincides with the final of the ICC Women’s T20 World Cup in Australia,” concluded Dr. Faul.

All proceeds from this initiative will go to a soon-to-be-identified safe house for women, looking after the needs of those with little or no means to escape their abusive circumstances.

The official statistics for the past decade as provided by South African Police Services (SAPS) make for horrifying reading:

• In terms of causative factors for contact crimes, domestic violence accounted for almost 22000 and is the fourth highest factor overall

This website uses cookies to improve your experience while you navigate through the website. Out of these, the cookies that are categorized as necessary are stored on your browser as they are essential for the working of basic functionalities of the website. We also use third-party cookies that help us analyze and understand how you use this website. These cookies will be stored in your browser only with your consent. You also have the option to opt-out of these cookies. But opting out of some of these cookies may affect your browsing experience.
Necessary Always Enabled

Performance cookies are used to understand and analyze the key performance indexes of the website which helps in delivering a better user experience for the visitors.

Analytical cookies are used to understand how visitors interact with the website. These cookies help provide information on metrics the number of visitors, bounce rate, traffic source, etc.

Advertisement cookies are used to provide visitors with relevant ads and marketing campaigns. These cookies track visitors across websites and collect information to provide customized ads.

Other uncategorized cookies are those that are being analyzed and have not been classified into a category as yet.