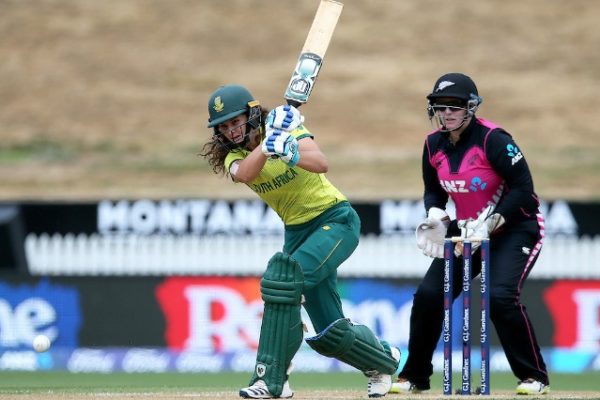 New Zealand Women produced a quality batting display to beat the South African women by 69-runs at the Basin Reserve on Monday afternoon to earn an unassailable 3-1 lead in the five-match T20I series.

The 2nd Wicket record partnership for New Zealand in international T20 history between Sophie Devine and Suzie Bates was the catalyst in their side’s win over the Proteas Women.

Sophie Devine was in impeccable form yet again as she top scored with 105 to power the Ferns to a series win as she smashed 3 sixes and 12 fours in a 65-ball innings as the hosts posted a mammoth total of 171/2 and her highest individual innings in T20 internationals.

The Proteas in response got nowhere close, all out for 102 after 17 overs with Lizelle Lee the only notable performer with 25 (22) and Anna Peterson taking three wickets for 22, as the series was comfortably one by New Zealand.

After winning the toss, Dane van Niekerk opted to bowl first and that proved to be the call the host were after as they ran riot with the bat from the onset.

Shabnim Ismail (1/21) momentarily slowed down the rate as she clean-bowled Lauren Down for 11 (9) in the third over to leave the hosts 27/1.

That wicket proved to be the start for the scene of carnage as Devine and Bates cleared the boundary with ease to leave the Proteas bowlers with no idea of what had just hit them. The pair who have been instrumental in their sides display in the T20I series continued their impressive batting exhibition and helped overhaul their previous best partnership with the 2nd Wicket record partnership of 142 which proved to be the bedrock of the highest total in this series.

The Proteas just failed to fire in their chase of the 172 target and were no match for the hosts who proved to be the better side on the day.

The opening pair of Lizelle Lee and Laura Wolvaardt opened up and tried to get a positive start with three boundaries in the early stages, but when the latter fell and was followed by Sune Luus 16 (14) and Lee in quick succession the visitors were up against it. Proteas captain, van Niekerk 10 (12) and Mignon du Preez 14 (12) worked on steadying the ship to get them back in the game. The pair opened their shoulders as they smashed a couple of boundaries and at 4/70 with 10 overs gone it was written that the required rate was nowhere within their reach as in the end, South Africa fell short at 102 all out.

The teams will now head to Dunedin where the last match of the T20I series will played and both teams will hope to end on high ahead of the women’s T20 cricket showpiece in Australia.