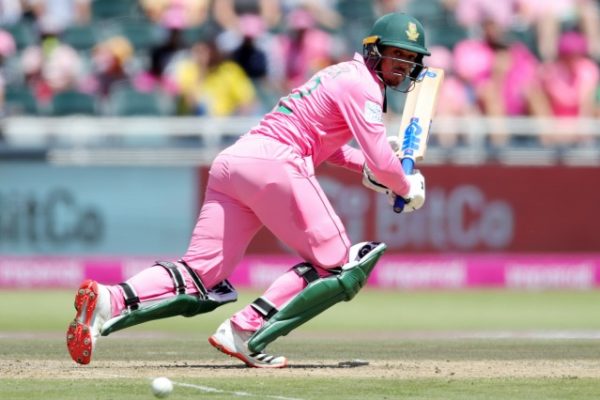 THE Momentum Pink Day ODI lived up to its reputation of producing stirring cricket at the Imperial Wanderers Stadium on Sunday. The last time the Standard Bank Proteas and England met in this iconic fixture the home side triumphed by one wicket off the last ball of the match.

This time it was England who triumphed but not before they had had some nail-biting moments before getting over the line by two wickets although they had 40 balls in hand.

The series was thus tied 1-1 after the Proteas won at Newlands and the second match at Hollywoodbets Kingsmead was washed out after only 11 overs.

England’s victory was set up by their two frontline spinners, Adil Rashid, who was named Momentum Man of the Match) and Moeen Ali, who were both playing for the first time in the series and took a combined 4/93 in their 20 overs as they worked their way through the Proteas top order. Moeen also shepherded the England tail at the climax of their runs chase.

The Proteas total of 256 was one that can seldom be defended at the Wanderers and it seemed even less likely to happen after the opening blitz between Jason Roy and Jonny Bairstow who scored 61 runs off the first six overs and enabled England to score an imposing 77/2 in the opening power play. This was compared to the 36/1 that South Africa managed to score in the comparative period after they had lost the toss and had to bat under the more challenging conditions.

Nevertheless they still looked well in the game when Quinton de Kock (69 off 81 balls, 5 fours and 2 sixes) and Temba Bavuma put on 66 off 76 balls for the second wicket and then De Kock and Jon-Jon Smuts a further 46 off 51 balls for the fourth.

An important turning point was the needless run out of Smuts who had played the spinners better than most, depriving David Miller (69 not out off 53 balls, 4 fours and 4 sixes) of a specialist partner in the crucial last 7 overs when he had to shepherd the tail and probably made the difference between the target that was set and one that would have been a lot closer to the 300 mark.

In the end the Proteas only came up just short and the fighting spirit and energy they showed will go a long way to build public confidence in the brand.

De Kock was named Momentum Man of the Series as the leading runs scorer, including a century and half-century, and has strengthened his credentials as South Africa’s new ODI captain.