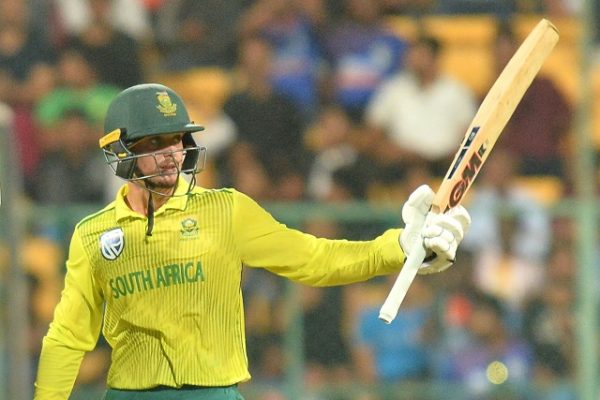 Quinton de Kock has been named captain of the Standard Bank Proteas T20 squad that will take on England in the three-match KFC T20 international series from 12 to 16 February 2020. Included in the team is the experienced Dale Steyn who returns to international cricket after nearly a year’s absence having fully recovered from a recurring shoulder injury. The squad is capped off with the maiden call-ups of VKB Knights batsman, Pite van Biljon and Warriors seamer, Sisanda Magala.

Magala’s selection is conditional upon the passing of a fitness test that he will have to take ahead of the first match in East London next week.

Bloemfontein born, thirty-three-year-old Van Biljon impressed selectors with stand-out performances over the last 24 months in the Cricket South Africa (CSA) T20 Domestic League, the Africa T20 Cup and Mzansi Super League. He averaged 48.00 in his seven innings of the 2019 instalment of the latter League, finishing fifth in the tournament’s Highest Averages list and a strike rate of 139.13.

Steyn’s last appearance for South Africa was in March 2019 against Sri Lanka in Centurion.

The selectors have also opted to extend the rest period of Faf du Plessis and Kagiso Rabada, who will officially take no further part in the remainder of England’s tour to South Africa.

“We are pleased with the group that we have selected for this upcoming T20 series against England. We have once again taken the opportunity to reward some of the hard workers of our domestic franchise system while some of our key senior players continue with their much-needed rest period and we have again, put our faith in Quinton (de Kock) to lead this group of exciting cricketers, picking up where he left off in India where he showed exemplary leadership.

“England have of course announced a competitive team and we are comfortable that we have the squad that can take them on and return positive results.

“With a T20 World Cup not too far away, we have begun the process of identifying several players whom we will be looking at over a period of time and hope that by the time September comes along, we will have the best possible squad of 15 representing South Africa.”

“The squad we have selected is a good indicator of the talent that we boast in our country. CSA believes in rewarding hard work and consistently good performances that have been put in by players over a period of time. This is why we are thrilled to include Sisanda Magala and Pite van Biljon to the T20 squad as we go about our search for that T20 World Cup 15. Both have been outstanding for their respective franchise teams in the past and we are keen to see how they do against an imposing English side.

“We are also pleased to give extended opportunities to players who have performed well within the national team as our show of commitment to them.”