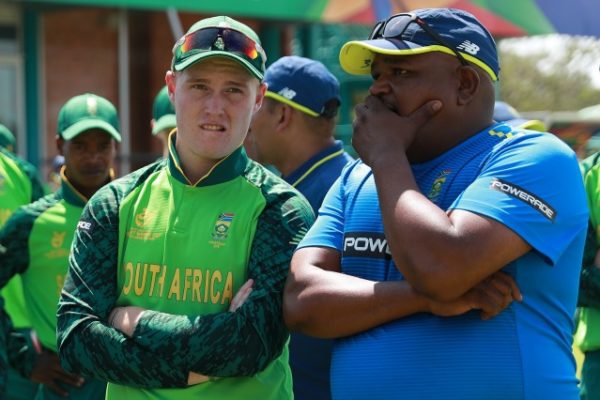 South Africa under-19s head coach, Lawrence Mahatlane, and captain, Bryce Parsons, reflected on a tournament of frustration, lots of growth and moments of brilliance as the team wrapped up their 2020 ICC under-19 Cricket World Cup in Benoni on Wednesday.

The Junior Proteas finished eighth place in the 13th edition of the youth cricket tournament following a five-wicket defeat to Afghanistan in the seventh-place play-off at Willowmoore Park.

Shafiqullah Ghafari grabbed four wickets for 15 runs as the sub-continent side dismissed the SA U19s for 154 all out before an unbeaten 73 off 113 balls (7 fours) from Ibrahim Zadran secured the victory for Afghanistan.

During the post-match press conference, Mahatlane explained where the difference lay between the two sides.

“From a batting point of view, we let ourselves down,” the coach said. “We lost too many wickets at the top. Being three down quite quickly and Jonathan’s (Bird) injury affected the momentum at the top and after that, we got into a space where our Nos. 9 and 10 got us to a half-decent total.

“We got a run out. If you look at the catches the boys took; there were some special catches but again, it was the bit of pressure and maybe trying too hard a couple of times.

“I wasn’t too disappointed, the guys tried hard without the success,” Mahatlane added.

Meanwhile, Parsons complimented the personality shown by his bowlers despite the uphill battle of defending a low total: “We didn’t score enough. We gave our bowlers a tough target to defend but they gave another good display out there today and showed some character.

“We got three wickets pretty early and we thought we might be in with a sniff. The spinners bowled pretty well, especially Odirile (Modimokoane), but it just wasn’t enough,” he continued.

In the first home World Cup since hosting it in 1998, the SA U19s were drawn in Group D with Canada, the United Arab Emirates and 2018’s semi-finalist, Afghanistan. Despite getting underway with an underwhelming result against the latter, the Junior Proteas then bounced back with two victories over Canada and the UAE to progress to the next round.

This is where the hosts then lost out to Bangladesh in the Cup quarter-finals before losing both fifth and seventh-place play-offs against the West Indies and Afghanistan.

“It’s frustration. It is frustration in that we are more than capable of achieving more, especially given that we are at home and we backed ourselves under home conditions,” Mahatlane said in summarising the campaign.

“In terms of time spent together, this is the most time I have spent with an U19 team. We have been together for six weeks now but unfortunately, during the pressure moments, we didn’t handle those well.

“The boys are learning from this, if you watch the batting against spin throughout the tournament, there were some special moments, unfortunately, they weren’t consistent enough,” he commented.

Although the results didn’t go according to plan, there certainly were moments to remember, including the batting performances displayed by the captain, Parsons, particularly during the two wins for the side.

“It is a bit of a disappointing feeling now,” the skipper said. “With the quality, we have in our squad, we underperformed a bit, but we have shown character throughout this World Cup. We won two must-win matches in the group to qualify and I think that showed character from us but then in the knockout games, after the Bangladesh loss, we just didn’t click.

“I am still proud of everyone. We showed a lot of character and I am excited to see how the guys are going to move forward and hopefully, there are some cricketers that play for the Proteas one day,” Parsons concluded.