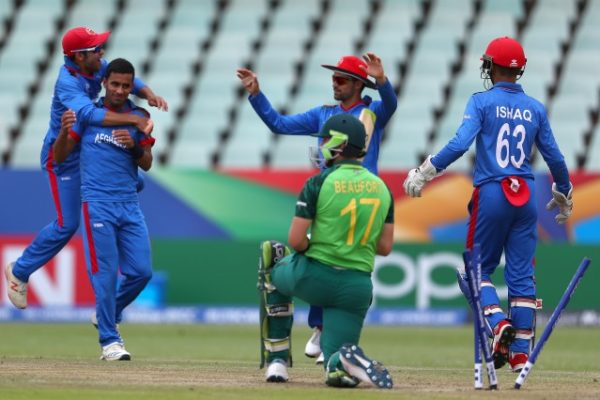 The South Africa under-19s concluded their ICC under-19 Cricket World Cup 2020 with a five-wicket defeat against Afghanistan in the seventh place Play-off encounter in Benoni on Wednesday.

An unbeaten half-century from Ibrahim Zadran featured in the sub-continent side’s successful run chase after they bowled the Junior Proteas out for 154 thanks to Shafiqullah Ghafari’s four-wicket haul.

Having won the toss and elected to set a score, the SA U19s suffered a stuttering start and lost three early wickets, including the captain, Bryce Parsons (6), who ends the tournament with 265 runs in six matches.

The hosts soon experienced another setback, with the opener, Jonathan Bird was struck by a fierce delivery on the elbow from Abdul Rahman (two for 47), forcing the left-hander to retire hurt on 17.

Reeling on 44 for three after the opening 10 overs, Luke Beaufort (19) and Tyrese Karelse (10) steadied the ship with a promising 39-run stand before Shafiqullah Ghafari wreaked havoc in the middle order.

The spinner, who took figures of six for 15 in the opening game against the same opponents, claimed three wickets in succession to dismiss Karelse, Beaufort and Khanya Cotani (3).

An important 51-run, eighth-wicket stand between Merrick Brett (28) and Mondli Khumalo (26) helped the home side into triple figures before a late cameo from the returning Bird (34) carried the SA U19s to a competitive total.

Ghafari finished with leading figures of four for 15 as he ended the tournament with 16 wickets, while Fazal Farooqi contributed with three for 33.

In their response, the Afghanistan outfit made light work of their pursuit of the target, with Sediqullah Atal (40) the aggressor in his opening partnership with Zadran, dispatching four fours and three sixes to help his team take control of the proceedings.

Despite the latter falling to Parsons (one for 26) and with fellow spinner, Odirile Modimokoane (two for 37) picking up two more scalps, Zadran and Abdul Rahman (27) put on a partnership worth 86 runs to edge the Afghan side to the verge of victory.

Zadran recorded a patient 73 off 113 deliveries (seven fours) to anchor his team as they strolled home to victory with 9.3 overs to spare.