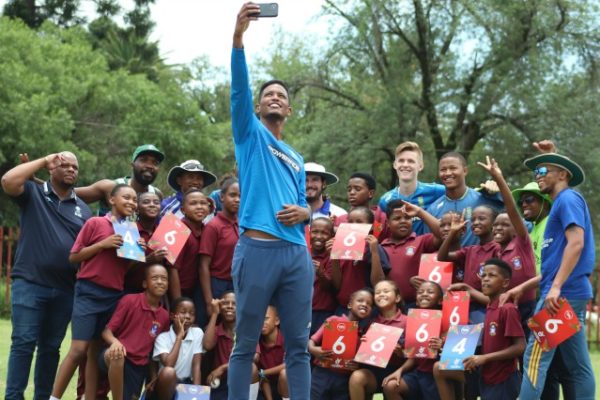 The South Africa under-19s today held a fun-filled coaching clinic for the boys and girls from the Saints Christian Primary School ahead of the team’s play-off semi-final against the West Indies taking place on Saturday in Potchefstroom.

This initiative forms a part of ICC’s Cricket for Good campaign, which is aimed at leveraging the vast power and reach of the sport to positively impact the lives of children and families worldwide.

A few members of the Junior Proteas squad, including North West-born Odirile Modimokoane along with Merrick Brett, Levert Manje and Andrew Louw joined the school’s aspiring cricketers for a round of mini-cricket matches and fielding exercises.

“It was great fun,” SA U19s fast bowler, Brett, commented. “I remember I started enjoying cricket from a young age. As a youngster, I loved it and I think I started to forget how much fun cricket is but coming back here and just seeing all the youngsters smiling and playing around brought the enjoyment back for me.

“I saw a lot of talent here and I am excited to see where a lot of these kids go. I was really impressed. In my group, there was this girl, her name is Valencia and she’s a very good fast bowler.

“I am a fast bowler and I was very excited to watch her bowling the boys over, it was incredible. I think if you are a girl who loves cricket, it is important to start from an age like this,” he added.

Amongst the many young, smiling faces in attendance, 12-year old, Bokamoso Moetsi shared his excitement of having the country’s #FutureStars spending the morning with them before pointing out his cricketing hero.

“It felt great, it was a nice opportunity to learn stuff, things we didn’t learn before and it was a privilege to be here,” the Saints Christian pupil said.

“The batting and bowling was nice, I enjoyed it very much, and the fielding was also quite nice. It was really special.

“My role model is Ben Stokes because he won All-Rounder of the Year in 2019 and I love him, so much,” Moetsi added.

Following the underwhelming result in the Super League Quarter-final, going down by 104 runs to Bangladesh, the Junior Proteas will face off against the West Indies for a place in the fifth-place play-off final taking place at Willowmoore Park next Friday.

The match will get underway at 10h00 at the JB Marks Oval, with the action broadcasted live on SuperSport 12. Entry into the stadium is FREE.