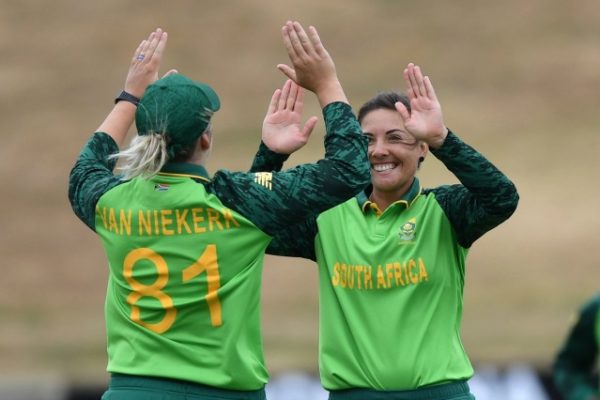 The Proteas Women chased down 150 with 12.4 overs to spare to complete a 6-wicket win over the White Ferns and take the One-Day International Series 3-0, after a brilliant display with the ball from all-rounder Sune Luus on Thursday in Hamilton.

Winning the toss and electing to field, the opening bowling duo of Mazrinne Kapp and Shabnim Ismail applied the necessary compression and were rewarded with a wicket each when they had openers, Lauren Down (7) and Maddy Green (5) back in the dugout inside four overs respectively.

Sune Luus was the pick of the bowlers as she picked up her second six-wicket haul (6/45) of her ODI career after the White Ferns batters were no match for her clinical bowling.

Luus struck early in her spell starting with Katie Perkins (11) who was brilliantly stumped by Trisha Chetty, and then the big wicket of Suzie Bates (51) followed to hamper the White Ferns’ innings just as they were building a decent partnership with Katy Martins. The leg-spinner then struck twice in the 33rd over to remove the well-set Martins (25) and Hayley Jensen (0) in the space of 4 balls, and then completed her six-fer with the dismissal of Jess Kerr (0) who was caught by Kapp.

The leggie bamboozled the White Ferns middle order with her guile and variety and brilliantly set up the Proteas Women for a relatively easy chase which started with openers Lee and Wolvaardt in their destructive mode in the run chase at the Seddon Park Cricket Ground, and they made the visitors pay, putting on 40 for the first wicket.

Lee, who walked away with the player of the series, hit four boundaries before falling for 20, caught by Bates off Jess Kerr. That brought Sune Luus to the crease, but she was gone for 16, caught in the covers. The wicket of Wolvaardt (26) four overs later brought Dane van Niekerk (30) to the crease to join Mignon du Preez (35*) enjoying a 43-run partnership – paced their innings brilliantly to ensure South Africa could complete the whitewash.

With 12 overs to spare and needing just 1 run, du Preez picked up a single to seal the win and the 3-0 series for the Proteas Women.

“I was really happy with how the girls handled the pressure in today’s match and how we went about our job with a sense of confidence. We started really well in the field. Kappie (Marizanne Kapp) and Shabnim (Ismail) managed to put pressure on and didn’t concede a lot. The six-fer from Sune (Luus) was the key and really proud of her– that’s initially what started it off and created a big buzz in the field and eventually giving us the series win. It is a great feeling to come out with a 3-0 win over a very strong New Zealand side.”

“I am pleased with the players, especially the execution of skill shown in all the three ODI games played. It was encouraging and pleasing to see the that the girls can actually perform at a high level and under pressure situations. It is lovely for us as the coaching staff to see the leadership skills which the ladies have developed throughout the tour. The character which they’ve shown and the responsibility which they are taking – that’s what has taken us over the line in this series.”