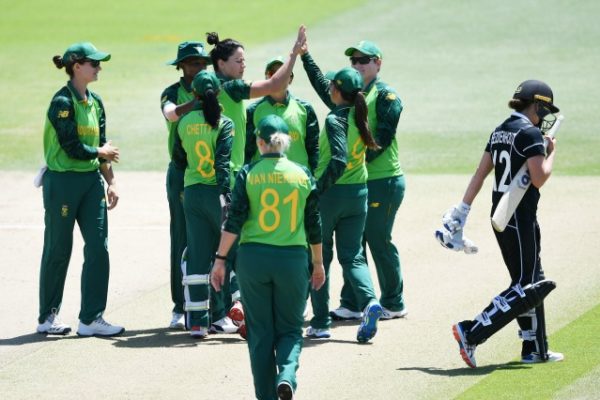 The Proteas Women produced a powerful performance from their bowlers to cruise to a decisive 2-0 series win in the One-Day International (ODI) series against New Zealand Women at Eden Park outer field today, winning the second game by eight wickets, backing up their 9 wickets win in the first ODI.

The victory was set-up by some impressive pace bowling from Marizanne Kapp, who along with Shabnim Ismail were parsimonious with the new ball. The latter, despite not taking a wicket conceded just 10 runs from her eight overs, while Kapp claimed impressive figures of 4/29 from her 8 overs, and Ayabonga Khakha continued her impressive return from injury with figures of 2/21 in her seven.

As in the opening ODI, when the Proteas Women restricted the White Ferns from dominating with the bat with only veteran Suzie Bates contributing with a respectable 38 off 60 balls, the entire attack was clinical.

Kapp new that the momentum was with the Proteas Women and never relented. She landed the ball around off stump with remarkable consistency, using a hint of swing to angle in at the pads, and a hint of seam or bounce to challenge the outside edge. In the end, she walked away with the player of the match accolades after setting up the team for a reasonably easy chase.

However, the chase did not start well with the ever-reliable Laura Wolvaardt departing without troubling the opposition after being caught behind by Martin off the bowling of Sophie Devine.

Instead of crumbling under pressure with the score at 15/1, Lizelle Lee was her usual destructive self with five boundaries and a maximum in a quickfire 38 off 43 deliveries. The dismissal of Lee in the 13th over was never likely to challenge Proteas – especially not once Sune Luus and Mignon du Preez had made a buccaneering end, with the 3rd Wicket partnership amassing 50 runs in 52 balls, (SE Luus 20, M du Preez 31) to lead the Proteas Women to a comfortable 8 wickets win.

The added significance of this victory for South Africa is that it takes the team up to fourth in the Women’s ICC ODI Championship standings, which runs from 2017-20. The top five of the eight competing countries in the Championship qualify automatically for the ICC 2021 World Cup, with the remaining three entering the qualification tournament.

The series will now move to Seddon Park in Hamilton for the 3rd and final ODI on Thursday, 30 January.